Aiming for the maximum

In what can only be described as a confluence of terrible news, catastrophically strong Hurricane Florence is now taking direct aim at North Carolina at the same time as the Trump administration has announced its plans to roll back Obama-era methane emission standards.  The reasons for this are the same as the reasons they've done every other damnfool thing they've done; (1) it benefits Trump's corporate sponsors in the petroleum industry, and (2) it allows him to check off another thing that Obama accomplished that he's undone.  Methane is one of the most powerful greenhouse gases known, having a heat-trapping capacity over seventy times higher than carbon dioxide's.

Some methane does occur naturally from decomposition.  This is why thawing of the Arctic permafrost is a grave concern; the anaerobic decomposition of the thick layer of organic matter underneath is feared to create a huge methane spike.  Methane also is present in cow farts, so the beef industry shares some of the blame, here.

But increasing the allowable amount of methane leakage from oil and natural gas drilling makes no sense unless you honestly have a short-term profit über alles attitude toward the habitability of the Earth.  The new proposal is a nasty confection of handouts to the fossil fuel industry at the expense of environmental health.  It includes:
Unsurprisingly, the petroleum industry is thrilled by all of this, and projections are that they will recoup nearly all of the $530 million that they'd have had to invest into following the Obama-era regulations. 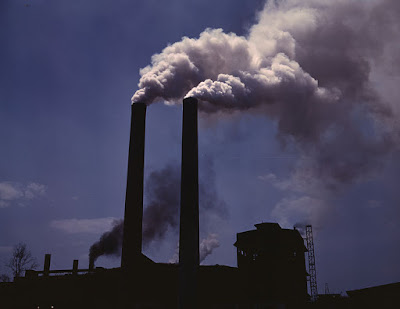 If that's not enough, last week it was announced that William Happer has joined the National Security Council.  Happer has stated outright that "there's no problem with CO2," and had the following to say about climate change science:


There is no problem from CO2.  The world has lots and lots of problems, but increasing CO2 is not one of the problems.  So [the accord] dignifies it by getting all these yahoos who don't know a damn thing about climate saying, "This is a problem, and we're going to solve it."  All this virtue signaling. You can read about it in the Bible: Pharisees and hypocrites and phonies...  [T]he significance of climate change has been tremendously exaggerated, and has become sort of a cult movement in the last five or ten years.

If a monster storm at the same time as all of this isn't sufficiently ironic for you -- increasing strength of hurricanes, after all, was predicted as an outcome of anthropogenic climate change thirty years ago -- last week a study from the University of Geneva was released that gives us some rather horrifying news about where all this could lead.  The warmest point in (relatively) recent Earth history is the Paleocene-Eocene Thermal Maximum, which occurred 56 million years ago and is thought to have been triggered by a double whammy of intense volcanic activity and destabilization of frozen methane hydrates on the ocean floor.  And I'm not talking about a little warm spell, here; the average global temperature shot up by five to eight degrees in a phenomenally short amount of time, and the recent study found that very quickly broad swaths of equatorial regions became effectively uninhabitable.  By the middle of this event, the amplitude of catastrophic flooding events had increased by a factor of eight, and there were palm trees growing above the Arctic Circle.

And I haven't told you the real kicker; once that maximum was reached, it took several hundred thousand years for the Earth's systems to recover.

Scientists are uncertain where we are with respect to the tipping point -- the point where feedbacks (like the thawing of the permafrost I mentioned earlier) begin to amplify, rather than counteract, the effect of global warming.  I'm convinced that the Trump administration doesn't disbelieve in climate change as much as it simply considers the question irrelevant.  So what if the world warms? seems to be the attitude.

We'll already have banked our share of the profit.  To hell with everyone, and everything, else.

Perhaps as of November, we'll see some new faces in Congress -- with luck, ones who not only care about science, but take the time to understand it.  Between now and then, I can only hope that the damage and loss of life from Florence and the other storms currently brewing in the Atlantic is as low as possible, and that maybe -- just maybe -- enough voters will wake up and see where we're headed before it's too late.