No one would be happier than me if it turned out there was an afterlife.

Well, at least some types of afterlife.  The tortured-forever-in-the-fiery-furnace version doesn't appeal much to me, especially given my status as an evil godless heathen.  Reincarnation, in my opinion, would also kind of suck, since it's basically getting sent back to the beginning of the game.  Valhalla would be kind of cool, though.  I could definitely get into swordfighting and quaffing mead.  And some of the ones where you get to relax in fields of flowers, with every need taken care of, also sound good, especially on work days.

The problem is, there's no real evidence of any of them.  Not that you'd expect there'd be; after all, to get to the afterlife you pretty much have to be dead.  And as Michael Shermer put it, it's easy to talk to the dead -- the hard part is getting them to respond.

There are people who claim there's evidence from near-death experiences -- NDEs, in common parlance.  The idea is that people who have had NDEs report back a lot of common features, including the well-known "tunnel of light" and feelings of oneness, bliss, and transcendence.  The argument goes that since what people claim to have experienced is often very similar, there must be something to it -- those people have peeked across the threshold, and come back to tell us about it. 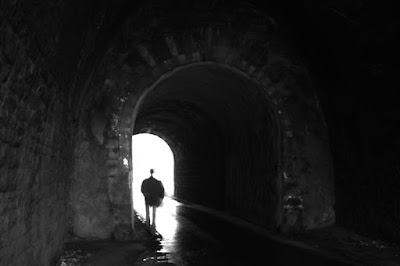 I've never found that argument terribly convincing.  Since we all have brains (although some of us could stand to use them more frequently), you'd expect that they'd respond similarly under similar circumstances of oxygen deprivation, neural shutdown, and all the other things that happens when a person dies.  And that stance has been bolstered considerably by a study done at Imperial College (London) last month, in which thirteen volunteers were given a chemical called dimethyltryptamine (DMT), and reported back experiences identical to what has been heard from people who have had NDEs.

DMT has become well-known because it is the main psychotropic ingredient in ayahuasca, a plant extract used in the Amazon Basin to induce hallucinations.  DMT interacts with serotonin and dopamine receptors in the brain, and that seems to be the cause of its effects, which include euphoria, visual disturbances, and -- most strikingly -- the sensation of communicating with non-corporeal beings.

What the researchers did with the test subjects in this study is to administer DMT under controlled conditions, and not only monitored their physical and mental states, but asked them for their subjective experiences when they "sobered up."  And there was an amazing similarity between the DMT trips and reports of NDEs.

What strikes me about all this is that if it's easy to simulate an NDE by altering your brain chemistry, maybe altering your brain chemistry is what causes an NDE.  As I tell my neuroscience students, if you monkey around with your neurotransmitters, you should expect bizarre things to happen; and, after all, since every experience we have is filtered through our neurotransmitters, it's bound to change your perception of the world.

It doesn't, however, mean that any of it is real.

There's also been a conjecture by more than one neuroscientist that endogenous (self-produced) DMT exists to protect our cells from the effects of oxygen starvation, so it's released in one big shot when our heart stops in a last-ditch effort to keep our brain cells alive.  If that's true, no wonder everyone experiences the same sorts of sensations in an NDE -- and their similarity to a DMT psychedelic trip.

So the DMT experiment is fascinating, but it seems to me not to bolster the case for an afterlife.  It does make me curious about the experience, however.  A friend of mine asked me whether I would take DMT or psilocybin if it was under controlled, safe circumstances, and I knew I wouldn't get arrested.  My answer was, "Absolutely."  The idea of creating the sensation of a transcendent experience sounds pretty appealing even if I don't believe it necessarily reflects any sort of external reality.

And, after all, my other alternative is to wait until I die, which strikes me as being less than optimal given that after having the transcendent experience, I'll be dead.

Kind of a downside, that.

Posted by Gordon Bonnet at 2:39 AM