Elegy for a treasure trove

I've always felt a very visceral sense of loss.  Even breaking a valued keepsake, for example, strikes me as sad by virtue of being irreversible, and triggers in me something that feels very much like mourning.

The bigger the loss, of course, the harder the gut punch.  I still have a vivid memory of finding out about the burning of the Library of Alexandria in 48 B.C.E., and carrying around with me a feeling very close to horror for several days afterward.  (Especially since many historians believe that the fire was deliberately set by soldiers sent to Egypt by Julius Caesar.)  The result of the fire was a devastating loss of cultural knowledge -- no one knows how many scrolls and books were destroyed, but even conservative estimates are in the range of forty to fifty thousand, most of which were the only copies in existence.

And some historians have said that the figure might have been closer to four hundred thousand. 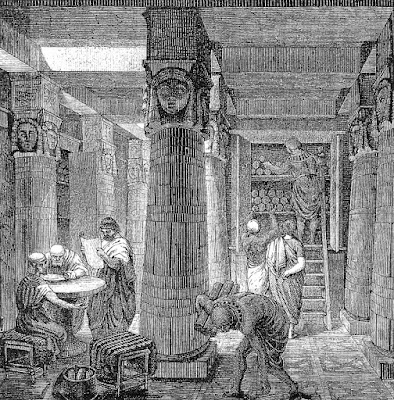 The Great Library of Alexandria (1886, woodcut by Otto von Corven) [Image is in the Public Domain]

Entirely lost were the works of Hipparchus (the "father of astronomy"), and the majority of the creative output of the playwrights Aeschylus, Sophocles, and Euripides.  Only one-third of the writings of Archimedes survive -- the other two-thirds were housed in the Library and were destroyed when it burned.

And that's just a few of the ones we know about.

I felt that same sense of crushing desolation two days ago when I heard about the destruction of the Brazilian National Museum in Rio de Janeiro while listening to NPR.  The fire -- whose cause is, as of the time of this writing, uncertain -- completely destroyed the museum and its contents, although there's still some hope that a few of the more fireproof items may have survived.  The impact on scholarship can't be exaggerated; several of the scientists who were interviewed were obviously trying to hold back tears while talking about it.

According to an article by National Geographic, the museum, founded in 1818, housed twenty million items relating to a wide variety of disciplines.  There was the 11,500-year-old skull of Luzia, the oldest human skeletal remains ever found in Brazil.  There were specimens of forty thousand different species of mollusks and five million species of arthropods.  The museum also had South America's most extensive collection of Egyptian artifacts -- almost certainly all destroyed.

"When I saw the news about the tragedy, I just started crying, and all my colleagues, other archaeologists I know in Brazil, they had the same reaction—that’s a loss for all the world," said Maria Ester Franklin Maia Silva, a Brazilian archaeologist and Ph.D. student at the University of São Paulo.

Silva isn't alone.  Marcus Guidoti, an entomologist nearing completion of his Ph.D. at the Federal University of Rio Grande do Sul, has witnessed the loss of the entire collection his research relied on.  And anthropologist Mariana Françozo, of Leiden University, was equally devastated. "I have no words to say how horrible this is.  The indigenous collections are a tremendous loss…we can no longer study them, we can no longer understand what our ancestors did.  It’s heartbreaking."

Fingers are already being pointed at the government for standing by and watching the Museu Nacional fall into disrepair, neglect which is almost certain to have contributed to the disaster.  The museum's fire safety precautions were nil, and there were no funds to amend it even had the directors wanted to.  Three years ago, they were forced to crowdfund money for repairing extensive termite damage -- because federal funding to repair the damage was repeatedly denied.

Brazilian president Michael Temer called the Museu Nacional's loss "incalculable to Brazil" and "a sad day for all Brazilians."  But Mariana Françozo wasn't impressed by his reaction.  "[My]... reaction is anger, because they knew the museum needed funding for years.  How do you ‘rebuild’ a 200-year-old collection that has burned to ashes?"

Whoever is at fault -- or even if the fire at the museum was entirely accidental -- reading about it leaves me feeling sick inside.  The loss to the wealth of human knowledge is enormous.  Like with the Library of Alexandria, the museum housed thousands of specimens that had yet to be studied, and whose destruction leaves a hole that can't ever be filled.