In the blink of an eye

One of the things I love about science is how it provides answers to questions that are so ordinary that few of us appreciate how strange they are.

I remember how surprised I was when I first heard a question about our vision that had honestly never occurred to me.  You know how images jump around when you're filming with a hand-held videocamera?  Even steady-handed people make videos that are seriously nausea-inducing, and when the idea is to make it look like it's filmed by amateurs -- such as in the movie The Blair Witch Project -- the result looks like it was produced by strapping a camera to the head of a kangaroo on crack.

What's a little puzzling is why the world doesn't appear to jump around like that all the time.  I mean, think about it; if you walk down the hall holding a videocamera on your shoulder, and watch the video and compare it to the way the hall looked while you were walking, you'll see the image bouncing all over the place on the video, but won't have experienced that with your eyes.  Why is that?

The answer certainly isn't obvious.  One guess scientists have is that we stabilize the images we see, and compensate for small movements of our head, by using microsaccades -- tiny, involuntary, constant jitters of the eyes.  The thought is that those little back-and-forth movements allow your brain to smooth out the image, keeping us from seeing the world as jumping around every time we move.

Another question about visual perception that I had never thought about was the subject of some recent research out of New York University and the University Medical Center of Göttingen that was just published last week in Current Biology.  Why don't you have the perception of the world going dark for a moment when you blink?  After all, most of us blink about once every five seconds, and we don't have the sense of a strobe effect.  In fact, most of us are unaware of any change in perception whatsoever. 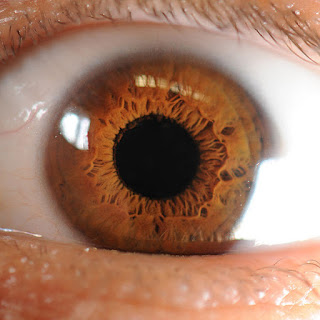 By studying patients who had lesions in the cerebrum, and comparing them to patients with intact brains, the scientists were not only able to answer this question, but to pinpoint exactly where this phenomenon happens -- the dorsomedial prefrontal cortex, a part of the brain immediately behind the forehead.  What they found was that individuals with an intact dmPFC store a perceptual memory of what they've just seen, and use that to form the perception they're currently seeing, so the time during which there's no light falling on the retina -- when you blink -- doesn't even register.  On the other hand, a patient with a lesion in the dmPFC lost that ability, and didn't store immediate perceptual memories.  The result?  Every time she blinked, it was like a shutter closed on the world.

"We were able to show that the prefrontal cortex plays an important role in perception and in context-dependent behavior," said neuroscientist Caspar Schwiedrzik, who was lead author of the study.  "Our research shows that the medial prefrontal cortex calibrates current visual information with previously obtained information and thus enables us to perceive the world with more stability, even when we briefly close our eyes to blink...  This is not only true for blinking but also for higher cognitive functions.  Even when we see a facial expression, this information influences the perception of the expression on the next face that we look at."

All of which highlights that all of our perceptual and integrative processes are way more sophisticated than they seem at first.  It also indicates something that's a little scary; that what we're perceiving is partly what's really out there, and partly what our brain is telling us it thinks is out there.  Which is right more often than not, of course.  If that weren't true, natural selection would have finished us off a long time ago.  But that fraction of the times that it's wrong, it can create some seriously weird sensations -- or make us question things that we'd always taken for granted.