This is a pretty outlandish claim right from the get-go, as there is no evidence the Egyptians had invented, or even had access to, any kind of advanced technology.  Plus, even with (relatively) modern technology, the first reasonably decent estimate of the speed of light wasn't made until 1676, when Danish astronomer Olaus Roemer used the difference in the timing of the eclipses of the moons of Jupiter when the Earth was moving toward them as compared to when the Earth was moving away from them, and came up with an estimate of 225,300,000 meters per second -- not too shabby given the limited technology of the time (the actual answer is just shy of 300,000,000 meters per second).

But there's something about those ancient Egyptians, isn't there?  There have been "secrets of the Pyramids" claims around for years, mostly of the form that if you take the area of the base of the Pyramid of Khufu in square furlongs and divide it by the height in smoots, and multiply times four, and add King Solomon's shoe size in inches, you get the mass of the Earth in troy ounces.

Okay, I made all that up, because when I read stuff about the "secrets of the Pyramids" it makes me want to take Ockham's razor and slit my wrists with it.  But I was forced to look at the topic at least a little bit when the aforementioned post about the speed of light started popping up on social media, especially when a loyal reader of Skeptophilia said, "You have got to deal with this." 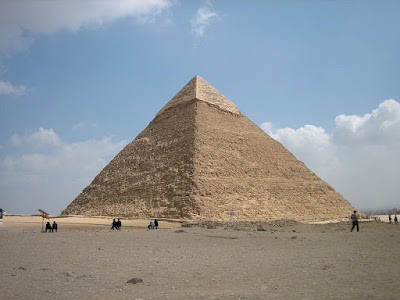 29.9792458 degrees of latitude is really specific.  One degree is approximately 111 kilometers, so getting a measurement of location down to seven decimal places is pretty impressive.  That last decimal place -- the ten-millionths place -- corresponds to a distance of 0.0111 meters, or a little over a centimeter.

But if you're just saying "somewhere on the Great Pyramid," there's a lot of wiggle room.  The base of the Pyramid of Khufu is about 230 meters on an edge, so that means that one-centimeter accuracy turns into "somewhere within 23,000 centimeters."

Not so impressive, really.

There's a second problem, however, which is that the second wasn't adopted as a unit of time until the invention of the pendulum clock in 1656.  The meter as a unit of length wasn't proposed until 1668, and was not adopted until 1790.  (And some countries still don't use the metric system.  I'm lookin' at you, fellow Americans.)  So why would the ancient Egyptians have measured the speed of light -- even assuming they could -- in meters per second, and not cubits per sidereal year, or whatever the fuck crazy units of measurement they used?

So as expected, this claim is pretty ridiculous, and not even vaguely plausible if you take it apart logically.  Not that there was any doubt of that.  The bottom line is that the ancient Egyptians were  cool people, and the pyramids are really impressive, but they weren't magical or advanced or (heaven help us) being assisted by aliens.

No matter what you may have learned from the historical documentary Stargate.

Oh, and for the record, I didn't invent the unit of "smoot" for length.  A smoot is 1.70 meters, which was the height of Harvard student Oliver R. Smoot, who in 1958 got drunk with his fraternity buddies and decided to measure the length of Harvard Bridge in Smoot-heights.  It turned out to be 364.4 smoots long, plus or minus the length of Oliver R. Smoot's ear.

And considering they were drunk at the time, it's pretty impressive that they thought of including error bars in their measurement.  Better than the damn Egyptian-speed-of-light people, who couldn't even get their measurement to within plus or minus 230 meters.