Attention pet lovers: do you want a truly unique, unusual pet?  One that will be the talk of the town?  If so, there's a once-in-a-lifetime opportunity to buy...

Sadly, I am not joking about this.  On the site Avito, which is a sort of Russian version of Craigslist, there's a guy selling his cat, and one of the selling points is that the cat is allegedly psychic.  The seller, Vladimir, says the cat is pretty special:


It possesses an array of magic powers.  Chiefly among them, is that it sees ghosts and spirit and, as such, it can determine their presence in your home, regardless of whether the apparitions are good or evil...  If you buy him, you need to deal with it, you need good hands.

I'm not entirely certain what the last line means.  It could be a problem with Google Translate, which heaven knows has its issues.  However, maybe it's some kind of warning that the cat is potentially dangerous, and needs to be purchased by someone with a "firm hand."

Unfortunately, though, my experience with cats is that the firmness of your hand has absolutely no effect on their behavior.  The last cat I owned, who was named Geronimo and who died two years ago at the ripe old age of 18, had very expressive eyes, which he used to communicate three things:

Nothing I did had the least impact on his bad habits, which included clawing the hell out of the furniture and peeing on things when he got in a snit, which was pretty much daily.  I'm honestly glad that Geronimo wasn't psychic, because he'd have probably used his powers to stare at me balefully until my skull exploded. 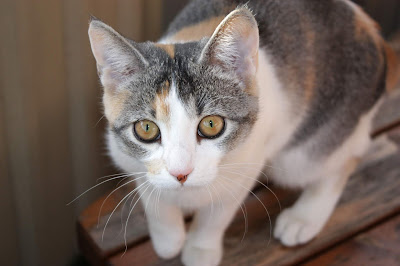 Anyhow, you must be wondering why Vladimir is selling this amazing animal, whom he has named "Sibgeo," given that he clearly believes in its powers himself.  He doesn't want to, he says, but he's moving to an apartment where pets aren't allowed, so he's trying to find Sibgeo a new home.  Which I suppose is nice enough.  But I haven't told you how much he's asking for it:

Five million rubles, which comes to about seventy-five thousand dollars.

I don't know about you, but I would not pay seventy-five thousand dollars for a cat, even if I had seventy-five thousand dollars of discretionary income available, which I don't.  Hell, I wouldn't pay seven hundred and fifty dollars.  Actually, toward the end of Geronimo's life I considered paying someone to take him, but my wife would have objected, and given that she was the one person in the universe who Geronimo tolerated, I couldn't exactly argue with her about it.

Initially I scoffed at the idea that anyone would pay that kind of money for a cat, psychic or not, but then I found out that last year, another psychic cat in Russia (I guess they're more common there) sold for eighty-three thousand dollars.  So I guess that's the going rate.  Or maybe Vladimir has a cat he doesn't want, and is trying to cash in on the psychic thing since it worked for the first guy.

But the whole thing brings up a question: how would you tell if a cat is psychic?  It's not like you'd think, "Wow, that cat is really getting fat, I should put him on a diet," and the cat would say, "I heard that, asshole."  Apparently, the way Vladimir knows is just that the cat acts weird sometimes.  For example, Vladimir was considering buying a house, and brought Sibgeo along, and Sibgeo started "behaving oddly."  Vladimir later found out that the house had been owned by a family whose grandmother "led a bad life," and Sibgeo was trying to warn him.

Why the grandmother's behavior had anything to do with it, since (1) she was dead, and (2) the rest of the family was moving out, I have no idea.  Maybe Sibgeo could tell us.

The more global problem is that a pet's odd behavior really doesn't tell you much.  In my experience, pets in general act weird more or less all of the time, and I doubt that any of it means they're psychic.  My guess is that domestication has kind of short-circuited them genetically, and all of them are eccentric, just in different ways.  (Ask your coworkers about "odd pets they've owned" if you doubt me.  You'll be there all day listening to stories.)

For example, another cat I owned, Puck, looked like this sleek, graceful, elegant black cat until she turned and looked at you.  First, I think she had mild strabismus, because her eyes never seemed to quite line up.  Second, she had one missing fang, so most of the time her tongue poked out of her mouth on that side.  Third, she had a creaky, irritable meow that sounded like "mehhhhhffff."  Fourth, she expressed affection by jumping into your lap, digging her claws into your leg, and then ramming the top of her head into your face.  She was actually quite a sweet-natured animal, but even people who loved cats had to admit that Puck looked and acted like she had a screw loose.

So that's today's news from the World of the Weird, Pet Edition.  Seventy-five thousand dollar psychic cats.  Me, I'm gonna stick with my dogs.  I don't have to worry about what they're thinking, because I already know, given that each of them came equipped with only a single thought.  Guinness's is "Let's play ball!"  It's his answer to everything.  Lena's is "Derp?"  She always has this comical perplexed-but-happy look on her face, as if she has no idea what's going on, but is determined to enjoy it anyhow.

I'll take that over a ghost-spotting cat any day.