The heart of the story

As a fiction writer, I am constantly working to make sure my writing is engaging.  What writers want, after all, is to keep readers turning the page, and when "The End" is reached, for them to go immediately to Amazon and order another.

I'm a "genre writer" -- paranormal/speculative fiction, with occasional forays into science fiction or horror -- and a lot of the writing in that realm is highly plot-driven.  Keep things moving, don't dawdle too much on setting and description, make every page exciting and every chapter ending a cliffhanger.  But some new research out of McMaster University has illustrated something I've always believed -- however plot-dense it is, all stories are, at their heart, character stories.

What the researchers did is hook people up to an fMRI machine, presented them with a brief prompt -- things like, "A fisherman rescues a boy from a freezing lake" -- and asked them to express the story behind the prompt in spoken word, written word, or drawings. 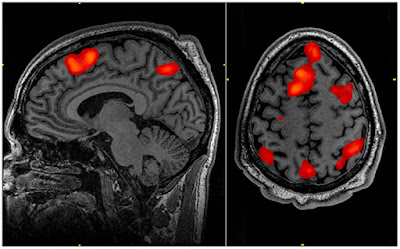 The results are fascinating.  In each case, and no matter what the prompt, the test subjects' brains responded the same way.  The network called "theory-of-mind" -- which responds to other people's motivations, personalities, beliefs, motives, and actions -- was the primary area that fired during the activity.  In spite of the fact that these characters were entirely fictional, and had not even been considered prior to the assignment of the prompt, the brain responded to their stories as if they were real people.

"We tell stories in conversation each and every day," said Steven Brown, associate professor of psychology, neuroscience, and behavior at McMaster, who was lead author of the study.  "Very much like literary stories, we engage with the characters and are wired to make stories people-oriented...  Aristotle proposed 2,300 years ago that plot is the most important aspect of narrative, and that character is secondary.  Our brain results show that people approach narrative in a strongly character-centered and psychological manner, focused on the mental states of the protagonist of the story."

Which I find absolutely fascinating, and which squares with my experience both as a writer and as a reader.  There have been times I've read books -- won't mention any names, out of courtesy to my fellow authors -- in which I've found the concept intriguing, but I have either not cared about the main characters or else actively disliked them.  And no matter how fascinating the plot, if I don't give a damn about the characters, why would I care enough to read to the end of the book?

I try my hardest to keep this in mind when I'm writing, and especially apropos of the characters who aren't likable.  It's easy enough to form an emotional attachment to the Good Guys, but a pet peeve of mine is Bad Guys who are one-dimensional.  Much as I love The Lord of the Rings, why was Sauron so damned nasty?  Did he actually like living in a wretched wasteland, and palling around with Orcs and Trolls and Giant Spiders and the like?  Did he finish his morning cup of coffee, and immediately look around for someone to torture?

Bad Guys -- even, in the case of Really Bad Guys like Sauron -- have to have some sort of motivation other than just being evil 'cuz they're evil.  In my own books, I had a striking experience with writing a character who is truly awful; Jackson Royce in this summer's release, The Fifth Day.  He is not a nice man.  But along the way (no spoilers intended) you begin to find out why he acts the way he does, and by the end, he's pitiable.  Still not likable, but pitiable.  I had one reader tell me, "Man, you had me hating Jackson and feeling terribly sorry for him at the same time.  I didn't think that was possible."

To me, that says that at least on that level, the story succeeded.

So it's fascinating that neuroscience has given us a first approximation to why we respond this way.  Humans are social primates; we're wired to react to the people around us, to parse their actions as if we could see inside their minds.  In other words, to put ourselves in their place, think whether we would have done the same, and try to ascribe motives to what they've done.

This tendency is so powerful that it activates even in the case of fictional characters.  Which, perhaps, explains why humans have been storytellers as long as there's been an audience of listeners and a campfire to sit around.