The truth is out there. Probably.

I've always been dubious about reports of UFOs.

To me, they always seem to come back to anecdotal evidence, which is lousy support for what is essentially a scientific conjecture.  As eminent astrophysicist Neil deGrasse Tyson put it, "If you're ever abducted, steal something from the spaceship, and bring it back with you... because then you'll have something of alien manufacture.  And anything that's crossed interstellar space is gonna be interesting.  But until then, we can't have the conversation... 'I saw it' just isn't enough."

The problem is, UFO sightings are incredibly common.  MUFON -- the Mutual UFO Network -- is devoted to keeping track of all the UFO sightings reported worldwide, and it's a full-time occupation.  (In the first half of 2018, there were 3,627 UFO sightings reported to MUFON, of which 647 were labeled "unknown" -- in other words, not accounted for by conventional explanations, at least in their opinion.)

Michio Kaku, the Japanese-born astronomer who has become a familiar face on documentaries about alien life, has weighed in on this, and has an interesting take on things.  "Ninety-five percent of all UFO sightings can be immediately identified as the planet Venus, weather balloons, weather phenomena, swamp gas.  You name it, we've got it nailed.  It's the other five percent that give you the willies.  Five percent remain totally unexplained...  We're talking about generals, we're talking about airline pilots, we're talking about governors of states, who claim that this is beyond our understanding of the laws of physics...  We've got multiple sightings from multiple sources.  Pilots, other eyewitnesses, radar.  These are very hard to dismiss...  And those are worth investigating with an open mind."

Which, I have to admit, is a good point.  However, it bears mention that Kaku himself has come under fire for his unorthodoxy, and in fact many of his colleagues think he's seriously gone off the rails, either because he's honestly crazy or because he knows that sensationalist pseudoscience sells.  (An especially scathing critique is the seriously unflattering RationalWiki page on Kaku and his claims.)

But this hasn't discouraged both the true believers and the skeptics who agree with Kaku that despite the complete lack of hard evidence, there's still something here worth investigating.  And they've found a couple of unlikely allies recently -- a retired intelligence officer named Luis Elizondo, and (of all people) Tom DeLonge, former front man for the rock band Blink-182.

Elizondo and DeLonge are unequivocal that we need to look into this further.  "Despite overwhelming evidence at both the classified and unclassified levels," Elizondo wrote, "certain individuals in the Department remain staunchly opposed to further research on what could be a tactical threat to our pilots, sailors, and soldiers, and perhaps even an existential threat to our national security."

It bears mention that Michio Kaku (in the interview I linked above) also emphasized the potential threat.  Any civilization that had mastered interstellar travel would likely be ahead of us, technologically, by thousands or even millions of years, and would view us much like we view an anthill -- as being not only not that interesting, but essentially expendable.  "There's no reason an advanced alien civilization would come bearing gifts and ask to be taken to our leader, any more than we bring crickets to ants and ask to speak with the queen."

DeLonge's involvement is curious, not because he's a true believer -- heaven knows, a lot of celebrities have odd ideas -- but because Elizondo and the others trying to convince the government to look into UFOs more seriously are mostly ex-government staffers and scientists, such as Jim Semivan (formerly of the CIA's National Clandestine Service), Robert Bigelow (a Nevada-based defense contractor), Chris Mellon (Deputy ­Assistant Secretary of Defense for Intelligence during the Clinton and George W. Bush administrations), and Hal Puthoff (formerly employed by the CIA and the Defense Intelligence Agency).  Including a musician makes for a little bit of an odd partnership.

And honestly, DeLonge seems to be involved mostly to get the message out, especially to younger people.  Elizondo is very cognizant of his sales pitch, and his quest is to reach as many influential people as possible.  Having a rocker on your side never hurts, publicity-wise.

As for me, I don't think there's anything wrong with further investigations.  After all, there could be something to some of those sightings.  Even though I tend to be in Tyson's camp, and believe that most UFO sightings are explainable from purely terrestrial causes (including the propensity of people to make shit up), I also agree with Kaku that if there's five percent -- hell, if there's one percent -- of the UFO sightings that are legitimate and have defied conventional explanation, they're worth looking into.

Plus, there's just the fact that I would really love it if intelligent aliens existed.  There's a reason I have this poster on my classroom wall: 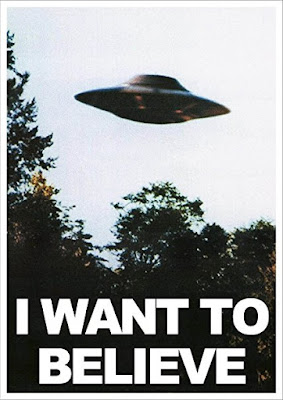 I would rather it if the aliens turned out to be friendly, of course.  I could do without having Earth invaded by Vogons, the Borg, the Draconians, the Cardassians, Shoggoths, the Slitheen, Xenomorphs, or the Tcho-Tcho People.  Vulcans would be more what I'm hoping for.

But I guess in these circumstances, you shouldn't be picky.

So I'll keep hoping, however the skeptical side of me keeps telling me not to hold my breath.