Can I explain something, for what I devoutly hope is the last time?

The Yellowstone Supervolcano is not about to erupt.

This claim has been going around for some time, in various guises.  Once it was because a tourist saw some bison acting oddly and from that jumped to "all the wildlife are leaving the park" and from there to "so it's about to blow sky-high."

Well, this was four years ago, and if the Supervolcano had erupted, I think we would have noticed.  So it's a big "nope" on that one.  Bison may be cool animals, but as geologists, they suck.

Then it got picked up by the conspiracy theorists, who conjectured that NASA or DARPA or FEMA or some other evil government acronym had found out that eruption was imminent, and was conspiring to cover it up so as not to cause mass panic, except some people with websites who really ought to be sedated found out, and were letting us know so we could get the hell out.  All of which was well-meant, I suppose, but it became a moot point when the eruption once again failed to materialize. 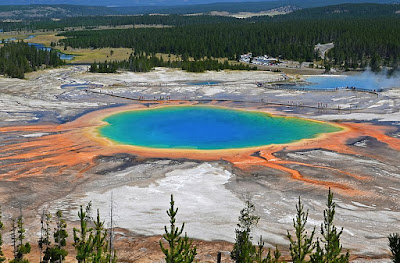 The latest iteration, which I have now seen posted as a serious claim at least a half-dozen times on social media, is that (1) Yellowstone is going to erupt, and (2) there's a secret NASA program to drill into it and bleed off the heat so they can prevent it.  At least NASA gets cast as one of the good guys, here; I'm sure the scientists are sick unto death of being portrayed as rubbing their hands together and cackling while plotting to destroy the world.

This comes from the apocalyptic site Breaking Israel News, and includes stuff like the following:


After initially denying that the unusual amount of seismic activity witnessed last year was an indication of imminent danger, NASA scientists are proposing a solution that could save half the world while admitting that their intervention could initiate the explosion it was intended to prevent.

Last year, increased seismic activity at Yellowstone generated a great deal of concern.  More than 2,300 tremors were recorded between June and September, one of the largest earthquake swarms ever recorded at the site.  Though geologists assured the public that the activity was normal for the site, another series of quakes and unusual eruptions beginning in February, increased fears that the supervolcano was waking up.  An investigation revealed magma filling up in the underneath chamber of the supervolcano.  In July, a massive, 100 ft.-wide fissure opened up in the Grand Teton National Park near Yellowstone, further increasing fears.

To look only at the most egregious errors in that passage:
So you don't need to cancel your vacation plans to Wyoming yet.  Scientists assure us that there will be plenty of warning if the volcano shows signs of an eruption.

Anyhow, the woo-woos need to give this one a rest, because we're all safe, from that threat, at least.  You'd think the more imminent threat would be climate change and the fact that Trump and his followers seem to be trying to create Nazi Germany 2.0.  Compared to that, I'll accept the risk of Yellowstone erupting without a second thought.