New from the "Should I Be Scared?" department, we have: the first experimental proof of a successful brain-to-brain interface.

To be sure, the information passed through it was rather rudimentary.  Two "senders" played a game of Tetris, and passed along to a "receiver" the information about whether a particular block had to be rotated or not in order to fit in the grid.  The receiver then recorded what the decision was -- and got it right with an accuracy of 81%.  Furthermore, in a second round where the receiver was given information about the accuracy of their choices, the researchers tried to muddy things up by injecting noise into the transmission from one of the senders.  The result?  The receiver was able to figure out which one of the senders to pay attention to -- which one had the highest accuracy -- and ignore the input from the channel with the noise.

The researchers -- Linxing Jiang, Andrea Stocco, Darby M. Losey, Justin A. Abernethy, Chantel S. Prat, and Rajesh P. N. Rao, of the University of Washington and Carnegie Mellon University -- are unequivocal about where this could lead.  "Our results," they write, "raise the possibility of future brain-to-brain interfaces that enable cooperative problem solving by humans using a 'social network' of connected brains."

Which certainly seems likely.  What worries me, however, is where else it could lead.  The technology is surely going to do nothing but improve, the interfaces working better and faster and more accurately.  At what point would it be possible to use such an interface to read a person's thoughts without their will?  To inject a directive, something like a post-hypnotic suggestion, into their brains?  To suppress or erase a memory of something you would prefer they didn't remember?

Of course, there are a lot of good directions we could go.  I've always thought I'd love to have a Matrix-style plug in the back of my head that would allow me to download information. 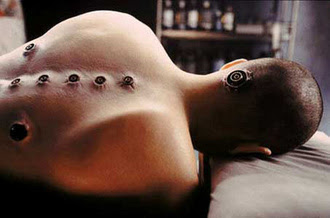 Think of how cool that would be!  Even if (for example) you'd still have to learn the grammatical rules and semantic nuances of a language, you could simply input the dictionary into your brain and you'd never have to memorize the vocabulary (which has always been the sticking point for me, linguistics-wise).  And Jiang et al.'s optimistic prediction of using it as a tool for collaborative problem solving is kind of awesome as well.

But you have to admit, we humans don't exactly have a sterling track record of using scientific discoveries for positive purposes.  Our general approach has usually been "personal gain first, power second" -- and only as an afterthought, "Oh, yeah, we could also use this to benefit humanity."

The problem is, once the cat's out of the bag, you can't exactly stuff it back inside.  As soon as someone shows proof of concept -- which Jiang et al. clearly have -- the next step will inevitably be refinement.  It's like the line from Ian Malcolm in Jurassic Park: "Your scientists were so preoccupied with whether or not they could, they didn't stop to think if they should."

I'm not saying we should halt this kind of research, but some caution seems advisable, especially since we're crossing the line into infringement on that most sacred and private realm -- one's own mind.  So I would urge anyone involved in this endeavor to move slowly, and take care to assure as best we can that this discovery won't be used as one more assault on free thought.