One of the weirder claims of modern physics, which I first ran into when I was reading about string theory a few years ago, is that the universe could have more than three spatial dimensions -- but the extra ones are "curled up" and are (extremely) sub-microscopic.

I've heard it explained by an analogy of an ant walking on a string.  There are two ways the ant can go -- back and forth on the string, or around the string.  The "around the string" dimension is curled into a loop, whereas the back-and-forth one has a much greater spatial extent.

Scale that up, if your brain can handle it, to three dimensions of the back-and-forth variety, and as many as nine or ten of the around-the-string variety, and you've got an idea of what the claim is.

The problem is, those extra dimensions are pretty thoroughly undetectable, which has led critics to quote Wolfgang Pauli's quip, that it's a theory that "is not even wrong."  It's unverifiable -- which is synonymous to saying "it isn't science."  But the theorists are still trying like mad to find an indirect method to show the existence of these extra dimensions.

To no avail at the present, although we did have an interesting piece added to the puzzle last month.  Astronomers Katie Mack of North Carolina State University and Robert McNees of Loyola University published a paper in arXiv that puts a strict limit on the number of macroscopic dimensions -- and that limit is three.

So sorry, fans of A Wrinkle in Time, there's no such thing as the tesseract.

The argument by Mack and McNees -- which, although I have a B.S. in physics, I can't begin to comprehend fully -- boils down to the fact that the universe is still here.  If there were extra macroscopic spatial dimensions (whether or not we were aware of them) it would be possible that two cosmic particles of sufficient energy could collide and generate a miniature black hole -- which would give rise to a universe with different physical laws.  This new universe would expand like a bubble rising in a lake, its boundaries moving at the speed of light, ripping apart everything down to and including atoms as it went.

"If you’re standing nearby when the bubble starts to expand, you don’t see it coming," Mack said.  "If it’s coming at you from below, your feet stop existing before your mind realizes that."

This has been one of the concerns about the Large Hadron Collider, since what this thing does is slam together particles at enormous velocities.  Ruth Gregory of Durham University showed three years ago that there was a non-zero possibility of generating a black hole that way, which triggered the usual suspects to conjecture that the scientists were trying to destroy the universe.  Why they would do that, when they inhabit said universe, is beyond me.  In fact, since they'd be standing right next to the Collider when it happened, they'd go first, before they even had a chance to cackle maniacally and rub their hands together about the fate of the rest of us.

"The black holes are quite naughty," Gregory said, which is a sentence that is impossible to hear in anything but a British accent.  "They really want to seed vacuum decay.  It’s a very strong process, if it can proceed."

"No structures can exist," Mack added.  "We’d just blink out of existence."


Of course, it hasn't happened, so that's good news.  Although I suppose this wouldn't be a bad way to go, all things considered.  At least it would be over quickly, not to mention being spectacular.  "Here lies Gordon, killed during the formation of a new universe," my epitaph could read, although there wouldn't be anyone around to write it, nor anything to write it on.

Which is kind of disappointing.

Anyhow, what Mack and McNees have shown is that this scenario could only happen if there was a fourth macroscopic dimension, and since it hasn't happened in the universe's 13.8 billion year history, it probably isn't going to.

So don't cancel your meetings this week.  Mack and McNees have shown that any additional spatial dimensions over the usual three must be smaller than 1.6 nanometers, which is about three times the diameter of your average atom; bigger than that, and we would already have become victims of "vacuum decay," as the expanding-bubble idea is called.

A cheering notion, that.  Although I have to say, it's an indication of how bad everything else has gotten that "We're not dead yet" is the best I can do for good news. 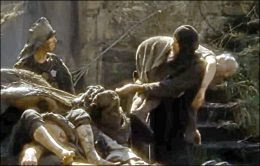 That's our news from the world of scientific research -- particle collisions, expanding black holes, and vacuum decay.  Myself, I'm not going to worry about it.  I figure if it happens, I'll be gone so fast I won't have time to be upset at my imminent demise, and afterwards none of my loved ones will be around to care.  Another happy thought is that I'll take Mitch McConnell and Lindsay Graham along with me, which might almost make destroying the entire universe worth it.