As of this morning, six explosive devices addressed to prominent critics of Donald Trump have been discovered, one of them (the one mailed to former CIA director John Brennan) found at the headquarters of CNN.  Fortunately, all of them were intercepted and rendered harmless.  As of the writing of this post, it is yet to be determined if any of the devices were capable of detonating, but officials say that they "contained some of the components that would be required to build an operable bomb" and the potential danger was being studied. 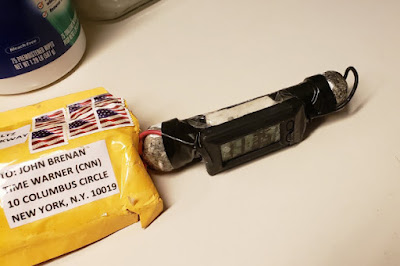 Trump was quick to disavow any responsibility for what happened.  In a speech given at the White House, he said, "In these times we have to unify.  We have to come together and send one very clear, strong, unmistakable message that acts or threats of political violence of any kind have no place in the United States of America."

Fine words from a man who has repeatedly vilified the men and women who were the targets, and done whatever he could to sow division, paranoia, and polarization.  Just last week he praised Montana Congressman Greg Gianforte for body slamming a reporter.   He initially condemned a neo-Nazi gathering in Charlottesville, Virginia that resulted in one death and nineteen injuries, but quickly backpedaled, saying, "I think there is blame on both sides.  You look at both sides.  I think there is blame on both sides."  He has called CNN and other members of the mainstream news media "enemies of the people" over and over.  Jeff Zucker, president of CNN, called it correctly.  'There is a total and complete lack of understanding at the White House about the seriousness of their continued attacks on the media.  The President, and especially the White House Press Secretary, should understand their words matter.  Thus far, they have shown no comprehension of that."

Then Trump's cronies joined in the fray.  CNN was just "getting what it deserved" for "spewing hate speech 24/7."  "Democrats are worse," one man on Twitter commented, then quoted Cory Booker's comment, "Get in their face," Maxine Waters's "No peace, no sleep," and Hillary Clinton's "We can't be civil until Democrats win."

Because this, apparently, justifies receiving a pipe bomb in the mail.

"Every time [Trump] says things like the press is the enemy of the people, his entire party needs to stand up against him and say something," Behar said.  "Mitch McConnell, where is he?  He’s the leader of this party."

"He’s getting harassed and heckled when he goes out in public to have dinner with his wife," McCain responded.  "So are we."

It didn't take long for a bunch of right-wing talking heads to say not only that liberals were responsible for the pipe bombs because they encourage violence, but that the liberals sent the pipe bombs themselves to make the Republicans look bad.  Chris Swecker, former analyst for the FBI, said in an interview on Fox, "It could be someone who is trying to get the Democratic vote out and incur sympathy."  Pro-Trump media personalities John Cardillo, Ann Coulter, Michael Savage, and Bill Mitchell were quick to agree.

But no one is capable of throwing gasoline on a fire like Rush Limbaugh.  "Republicans just don't do this kind of thing," Limbaugh said.  "You’ve got people trying to harm CNN and Obama and Hillary and Bill Clinton and Debbie 'Blabbermouth' Schultz and, you know, just, it might serve a purpose here."

Okay, you get the picture.

Words matter.  This has progressed far past the usual fractious partisan rhetoric and posturing that has gone on as long as there have been elected offices.  This is a leader -- the President of the United States -- who has over and over used inflammatory rhetoric to stir up his supporters, leading the cry of "lock her up" against Hillary Clinton (who has never been tried for, much less found guilty of, anything).  Ted Cruz, who evidently thought it was a good idea to take a page from Trump's playbook, said that Clinton and Cruz's opponent Beto O'Rourke could "share a double-occupancy cell."

Apparently now it's a crime to be a Democrat.

It's taken a lot to get me involved in politics.  I've said before that I hate politics because half of it is arguing over things that should be self-evident and the other half arguing over things that probably have no feasible solution.  I'm the child of two staunch Republicans, with whom I sometimes disagreed but always respected.  Personally, I've always been kind of a centrist; one of my besetting sins is that I see most things in shades of gray.

But if you still support Donald Trump, you are aiding and abetting someone who not only lies compulsively, not only is a homophobic, misogynistic narcissist, but is appealing to the worst traits in the American personality -- the tribalism, the xenophobia, the racism.  Not only appealing to them, encouraging them, inflaming the fear and the hatred and the polarization.  I usually try to find common ground with people I disagree with, but I'm beginning to think there is no common ground here.

If you voted for Trump, I get it.  He's very good at telling people what they want to hear, convincing them he's got all the answers.  If you still support him, I have nothing more to say to you other than that I will fight what Trump and his cadre stand for with every breath I take.  I'm done with being bipartisan, with trying to be polite to folks who want people like me erased from the earth.

At some point, you have to stop being nice and say "enough."  If there's still dialogue to be had, if they're still convincible, it's still worth talking.  But if not?  The only thing left is to push back with everything you've got.  I'll end with a quote from William Lloyd Garrison: "With reasonable men, I will reason; with humane men, I will plead; but to tyrants I will give no quarter, nor waste arguments where they will certainly be lost."