My obsession with aliens and cryptids is glaringly obvious, not only because of what I write about here, but from my classroom décor.  I've got a cardboard-cutout Bigfoot (not life-sized, unfortunately), a Bigfoot air freshener (it smells like pine, fortunately), and a variety of other alien- and cryptid-themed posters and paraphernalia.

But that's not saying I believe it all, which I'm hoping is also obvious.  The hard evidence for alien life, and for the most commonly-claimed types of cryptids, is woefully inadequate.  (For that read, "basically nonexistent.")  And the more claims there are, the more damning a lack of evidence becomes.  If any one of the cryptids people say they've seen -- Mokele-Mbembe, for example, which is the Congo's answer to the Loch Ness Monster -- actually existed, you'd think by now there'd be something.  A bone, a tooth, a clump of hair, some bit that could actually be subjected to DNA analysis and give us an anomalous, this-isn't-anything-we've-seen-before result.

Which is why, I suppose, the effort now being undertaken to find Nessie is at least approaching things the right way.  A geneticist, Neil Gemmell of the University of Otago (New Zealand), is heading a team that is trying to analyze DNA traces from the water of Loch Ness using a technique called eDNA, which is capable of identifying the source of even minuscule amounts of DNA (such as from shed skin cells, saliva, or urine). 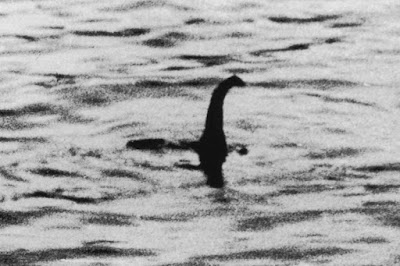 The German science news site Grenzwissenschaft-Aktuell quoted Gemmell in a press release day before yesterday.  "The method of eDNA is so effective because life itself is dirty," Gemmell explained. "Whatever creature moves through and lives in an environment, it leaves behind tiny fragments of its DNA...  It is this DNA that we are now able to extract and sequence in order to identify these creatures by comparing the sequences determined with the databases of known genetic sequences of more than 100,000 different organisms."

Gemmell writes, in a summary of their efforts:


Currently we are analysing the data we obtained from our Loch Ness sampling trip back in June.

Since then DNA from ~250 individual samples were extracted at the University of Hull.  From there the DNAs went to the laboratory of Professor Pierre Taberlet at the Université Grenoble Alpes, where we used PCR metabarcodes to amplify the eukaryotic and bacterial DNA sequences found in our samples.  We also used a set of metabarcodes that focus on vertebrate life, given that most monster myths focus on some large vertebrate-like creature.

These enriched DNA-sequences were then sent to Fasteris (a Swiss DNA sequencing service) in Geneva, where they were sequenced using Illumina sequencing technologies.  We now have ~500 million individual DNA sequences that we are exploring to understand what types of species were present in Loch Ness when we sampled in June 2018.

It takes some time to explore the sequences robustly, and we have ~5 labs doing this independently.  I expect we will have an answer as to what we have found by early 2019.

So I can commend Gemmell and his team for approaching this the right way.  Still, it's hard to imagine their getting any kind of positive results, or at least anything that would convince a skeptic.  If they find DNA from some unknown source -- even if it is close to that of existing birds or reptiles (the closest living cousins of the dinosaurs) -- how could you jump from that to "it's a plesiosaur?"

There is also, sadly, a pretty good argument for why there couldn't be a pleisiosaur in Loch Ness; the last ice age ended about 12,000 years ago, and at that point Scotland was underneath a huge slab of ice.  Any dinosaurs that were in Loch Ness at that point would have been dinosaursicles.  It's a good way inland; the nearest large(r) body of water is Moray Firth, ten or so miles away, and connected by the River Ness, which averages between two and five meters in depth (depending on which part of it you're measuring and how much it's rained).

Maybe it's just me, but that seems a little shallow to host a plesiosaur.  And that's even presuming that one was in Moray Firth when the ice receded.

So while I'm still willing to entertain the existence of Bigfoot, and even Mokele-Mbembe, Nessie has always seemed to me to be the least plausible of all the more famous cryptids.  There's just too much arguing against her existence, and zero hard evidence.

Anyhow, I wish Gemmell and his team luck.  It's worth doing, even if they find nothing of particular interest.  Of course, that won't dissuade the true believers even so.  Nothing does.

That's why they're "true believers."