Because it's always a losing bet to say the state of things in the United States couldn't get any weirder, today we have: a priest holding a mass of exorcism to protect Brett Kavanaugh from a spell cast by witches.

I wish I were making this up.  You might have heard about the witches, who were so pissed off about Brett Kavanaugh's nomination and ultimate accession to the Supreme Court that they hexed him.  Twice.  Once before the confirmation vote, and once, for good measure, afterwards.


We will be embracing witchcraft's true roots as the magik of the poor, the downtrodden and disenfranchised and [its] history as often the only weapon, the only means of exacting justice available to those of us who have been wronged by men just like him.

[Kavanaugh] will be the focal point, but by no means the only target, so bring your rage and all of the axes you've got to grind.  There will also be a second ritual afterward — "The Rites of the Scorned One" which seeks [sic] to validate, affirm, uphold and support those of us who have been wronged and who refuse to be silent any longer.

Well, far be it from the Righteous to take this lying down.  So Father Gary Thomas, who serves as an exorcist for the Diocese of San Jose, California, decided to take some serious action.  "Conjuring up personified evil does not fall under free speech," Thomas said, making me wonder what laws it would fall under. 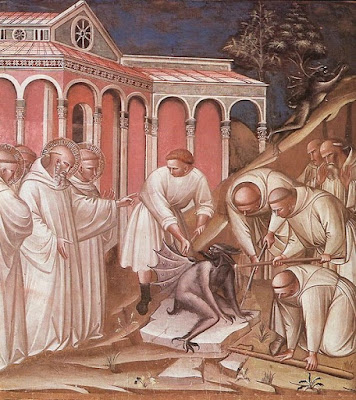 Spinello Aretino, The Exorcism of St. Benedict (1387) [Image is in the Public Domain]

Although given the current administration's reputation for doing whatever the evangelicals want, I wouldn't be surprised if the next bill to go through Congress is a Satanic Attack Protection Act.  Or perhaps a law preventing demons from immigrating into the United States.  Or maybe just a suggestion to build a wall along the border between the U.S. and hell.

Thomas went on to explain further:


They are going to direct the evil to have a permanently adverse effect on the Supreme Court justice.

When curses are directed at people in a state of grace, they have little or no effect. Otherwise, [I have] witnessed harm come upon people such as physical illness, psychosis, depression and having demons attach to them. Curses sometimes involve a blood sacrifice either through an animal or a human being, such as an aborted baby...

The decision to do this against a Supreme Court justice is a heinous act and says a lot about the character of these people that should not be underestimated or dismissed. These are real evil people.

I suppose this is to be expected from someone in my position, but to me this really sounds like two kids fighting with finger guns, one saying, "Pew-pew-pew!  I got you!  You're dead!" and the other saying, "No, I'm not, I got my magic invisible shield up in time!"

Only these are adults, and I have the sneaking suspicion that a significant proportion of Americans think this is perfectly normal behavior.  And these people vote.

So that's today's contribution from the Department of Surreal News.  I keep thinking that we have to have plumbed the depths of government-endorsed insanity, but I keep being wrong.  A friend of mine thinks that all this is happening because we're living in a computer simulation, and the programmers have gotten bored and now are simply fucking with us to see what we'll do.

And I have to admit, it makes as much sense as any explanation I could have come up with.