O, would some power the giftie gi'e us
To see ourselves as others see us.
It would frae many a blunder free us,
An' foolish notion.

I got a lesson in that general principle this past weekend, when I went to my 40th high school reunion.  Which was a little surreal from another aspect, which is that I can't really believe that much time has passed.  I don't feel like I'm a week or so shy of 58 years old, but I had confirmed for me several times at the party that yes, actually we are that old.

Maybe the reason I don't feel old is because my personality, and especially my sense of humor, kind of plateaued some time around tenth grade.  I mean, I still laugh at fart jokes.  I suppose that's why I ended up teaching adolescents, I'm right on their emotional level.

But there was another eye-opening thing about the reunion, which was how many people remembered me with apparent fondness.  I didn't think I was disliked in school so much as I felt invisible, kind of a nonentity.  Because of my shyness and anxiety my social life was zilch, and I figured most of my classmates had their attention focused on the popular kids -- the confident ones, the star athletes, the party animals, the class clowns.

Me, I read a lot, ran a lot, listened to music, and tried to figure out how to do the bare minimum homework it took to get by in classes I didn't like.  Other than that, I pretty much just tried to keep my head down and fly under the radar.  I did have a bit of a reputation for being a smartass (something that got me in trouble more than once), but overall, I felt like someone no one much would have a reason to notice.

I was bowled over by the warmth with which I was greeted on Saturday night.  I received dozens of hugs and handshakes, and was told over and over how well people remembered me.  I thought that some of it might be Facebook -- since I post links to my novels and to Skeptophilia there, I knew that the dozen or so of my former classmates who are Facebook friends would know a bit about me.

But it's more than that, because I received the same kind of welcome from people who aren't connected to me on social media, and most of whom I literally have not seen since we graduated in June of 1978.  I left that evening feeling a mixture of elation and sadness -- elation because I was evidently much better liked than I ever dreamed, and sadness because I hadn't realized it at the time, and had spent the intervening years thinking of myself as having been the amiable, bookish nobody, the kid who everyone looked past, who never got into the yearbook, whom no one really knew.

What this all points up is how completely inaccurate our own self-assessments are.  I wish I'd known sooner.  I might have been less afraid, less worried about what others thought, less concerned that everyone else seemed more popular than me.  I might have had the courage to join clubs, go to dances, ask out the cute girl I had a life-threatening crush on.  To put it succinctly, I might have had a hell of a lot more fun. 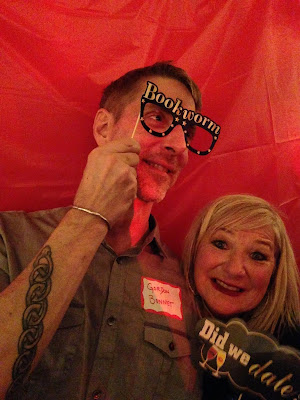 Me having fun, of all things

But as my grandma always said, if wishes were horses, then beggars would ride.  You can't change the past; all you can do is recognize it for what it is, realize you were doing the best you could with what you knew then.  Forgive yourself for what you didn't know, what you misunderstood, for your missteps and fumbles and awkward moments.  We've all had them, and they apparently matter far, far less than we usually think at the time.

So the party was great, and being that this is southern Louisiana, there was enough food to feed the French army, a well-stocked bar, and music and dancing and socializing until the wee hours.  I arrived home Monday night, exhausted and still feeling a little disembodied.  And the oddest thing of all is that I -- as neurotic and anxious as I am -- fell asleep with the thought, "Hey, they said there'll be a 45th reunion in five years.  I'm already looking forward to it."

Posted by Gordon Bonnet at 2:28 AM