The danger of myside bias

Fighting bad thinking is an uphill battle some days.

I'm very much including myself in this assessment.  I have biases and preconceived notions and places where I stumble just like everyone else.  Fixing these errors would be nice -- can you imagine the world if all of us were able to think clearly and make our decisions based on evidence?

A pipe dream, I know, and all the more so after I read a new paper in Journal of Cognitive Psychology called "My Point is Valid, Yours is Not: Myside Bias in Reasoning About Abortion," by Vladimíra Čavojová, Jakub Šrol, and Magdalena Adamus of the Institute of Experimental Psychology at the Slovak Academy of Sciences in Bratislava, Slovakia.

In an elegant piece of research, Čavojová et al. gave a series of logic puzzles to volunteers who had been asked in a prior questionnaire what their attitudes toward abortion were, and whether they had prior experience with formal logic.  They were then asked to determine whether various syllogisms were valid or not.  Some were neutral:

Some had to do with abortion:

To solve each of the syllogisms, it should be irrelevant what your opinion on abortion is; the rules are that if the premises (the first two statements) are true, and the argument is valid, then the conclusion is true.  The participants were told from the outset to treat the premises as true regardless of their views. 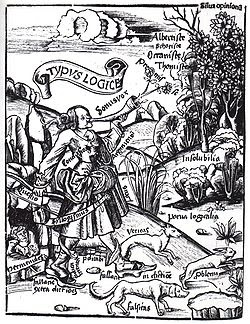 What is fascinating is that both people who were pro-choice and pro-life had a hard time rejecting invalid syllogisms that gave them a conclusion they agreed with, and accepting valid syllogisms that gave them a conclusion they disagreed with.  This pattern held equally with people who had training in formal logic and those who did not.  It's as if once we're considering a strongly-held opinion, our ability to use logic goes out the window.


The study explores whether people are more inclined to accept a conclusion that confirms their prior beliefs and reject one they personally object to even when both follow the same logic.  Most of the prior research in this area has relied on the informal reasoning paradigm; in this study, however, we applied a formal reasoning paradigm to distinguish between cognitive and motivational mechanisms leading to myside bias in reasoning on value-laden topics (in this case abortions).  Slovak and Polish (N = 387) participants indicated their attitudes toward abortion and then evaluated logical syllogisms with neutral, pro-choice, or pro-life content.  We analysed whether participants’ prior attitudes influenced their ability to solve these logically identical reasoning tasks and found that prior attitudes were the strongest predictor of myside bias in evaluating both valid and invalid syllogisms, even after controlling for logical validity (the ability to solve neutral syllogisms) and previous experience of logic.


Which reinforces my not very optimistic notion that however good our brains are, humans remain primarily emotional creatures.  When something elicits a strong emotional response, we're perfectly willing to abandon reasoning -- and sometimes aren't even aware we're doing it.

All of which bodes nothing good from any attempt to correct these errors.  As we've discussed before, even trying to combat bad thinking initiates the backfire effect, wherein people tend to double down on beliefs if they're challenged, and even if they're given concrete evidence that they're wrong.

Makes you wonder what I think I'm accomplishing by writing this blog, doesn't it?

Posted by Gordon Bonnet at 7:57 AM