A lot of people I know are devastated by this weekend's swearing-in of Brett Kavanaugh to a lifetime appointment to the Supreme Court.

Let me say up front that the outrage I'm seeing has very little to do with political stance.  I have friends who are Democrats, Republicans, Independents, and Libertarians who all seem equally appalled.  If you doubt that -- if you think this is some kind of butthurt response from liberals -- allow me to do a reality check for you that there was no such outcry from liberals over Neil Gorsuch's appointment.  Sure, liberals don't much like his views, and weren't happy that he was going to tilt the Court to the right.  There was a hell of a lot of anger over the fact that Mitch McConnell and others contrived to prevent Merrick Garland from getting a fair hearing.

But Gorsuch himself?  Whatever you think of his opinions, there's not much doubt that his credentials are excellent and his background squeaky-clean.

Kavanaugh, on the other hand.  Here we have not just one but three credible allegations against him of sexual abuse, multiple instances where it is claimed that he lied under oath about his past, and the withdrawal of support by the American Bar Association and the National Council of Churches.  What was the response?  A cursory look at the situation by the FBI in which investigators didn't even interview the people central to the claim, including Julie Swetnick (Kavanaugh's third accuser) and several friends of Deborah Ramirez (the second accuser) who said they would corroborate Ramirez's claim under oath. 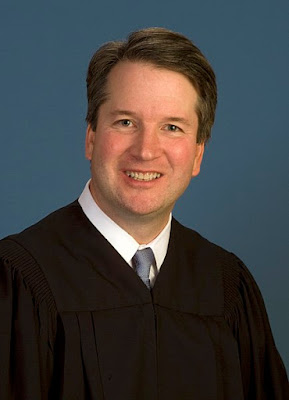 The worst part is that the Republicans have known that Kavanaugh was a sketchy candidate from the start.  They prevented access to most of his records as White House Staff Secretary, his contributions to the Starr Report (which recommended the impeachment of Bill Clinton), and his work in the 2000 recount that gave the presidency to George W. Bush, papers that had direct bearing on his opinions and legal qualifications.  It's never been about giving the man a fair hearing, where the decision makers have all of the information they need to make a thorough evaluation.  It's been about getting Kavanaugh through the process as fast as possible.  Any attempts to slow things down were labeled as "Democratic obstructionism" and the person making them was steamrolled.

So Mitch McConnell, Lindsay Graham, and Chuck Grassley rammed the nomination through because they could.  I have to admit there's a piece of this I still don't understand; why they didn't cut their losses with Kavanaugh when it was obvious he was a deeply flawed choice, and find someone (like Gorsuch) with strong conservative views and an unimpeachable background?

But that's minor at this point.  What is certain is that McConnell et al., with the approval of Sexual-Abuser-in-Chief Donald Trump, pushed this appointment through, and people like mealy-mouthed, spineless Jeff Flake (who excels at looking sad and telling everyone how troubled he is over the situation, then voting the party line every fucking time) let it happen.

And look at Susan Collins.  She's the one that's generated the most anger.  "I do believe that [Dr. Ford] was assaulted," she said, after Kavanaugh was sworn in.  "I don't know by whom.  I'm not certain when."

Well, Senator Collins, then how about we do a thorough investigation, not just the five-day farce that happened last week?  How about we give a careful look at the other accusers' claims?  Maybe he'd get cleared, I dunno.  Maybe at least it'd be found that there wasn't enough concrete evidence to decide one way or another. But as it stands, we have three women who at great cost to their personal lives have come forward and made themselves the target of right-wing rage, and accomplished exactly nothing.  Hell, Christine Blasey Ford was publicly ridiculed by the president of the United States.

Is it any wonder that victims of sexual abuse are reluctant to come forward?

I have several friends who are survivors of abuse, and I can't begin to imagine what they're feeling right now.  They seem to be in shock that the people they elected to represent them have shown such callous disregard for the trauma they've been through.  Myself, I'm trying not to give up completely.  There has been so much in the last two years that seems to be a slow slide into autocracy, where dissent is labeled as treason, where any media that is not following a North-Korea-style state-sponsored party-line-über-alles style is disregarded as fake news.  I've been writing about this since Trump was first seeking the nomination, as have many others with far more reach than I have, and all of it has availed us nothing at all.

But it seems to me that the only thing giving up accomplishes is that we'll have more of the same.  A wise friend of mine said, "Use alchemy.  Take your despair, disillusionment, and frustration, and distill it into anger."  She's exactly right.  We can't allow the likes of McConnell, Grassley, and Graham, alternately raging when they're challenged and smirking when they're not, to win the day.  Yes, we lost this battle.  But we've got to play the long game, here.

I will end with a quote from one of my heroes, the incomparable Kenyan activist Wangari Maathai, winner of the 2004 Nobel Peace Prize for her work in reforming environmental policy and supporting women's rights in her home country.  "The only way to accomplish anything is to keep your feelings of being empowered ahead of your feelings of discouragement and inertia.  There is no one solution for everything, but there are many solutions to many of the problems we face.  There is no excuse for inaction."

Posted by Gordon Bonnet at 4:57 AM