In breaking news about creatures that almost certainly don't exist, today we have: Mothman Visits Chicago.

If you've heard of Mothman, it's probably because of the 2002 movie The Mothman Prophecies starring Richard Gere, which had nothing to do with prophecies but did feature a large, dark creature whose only apparent similarity to a moth was having wings.  To me, it looks more like a cross between a spider monkey and a peregrine falcon, with the added feature of having glowing red eyes.

Here's an artist's conception of the Mothman: 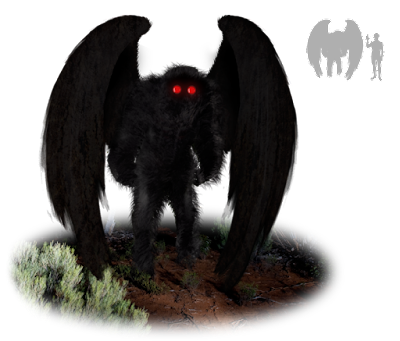 I'm a little mystified by the guy waving cheerily in the inset on the top right.  He looks perfectly at ease.  "Hey, y'all," he seems to be saying.  "I'm completely unconcerned by the fact that I'm standing next to a scarlet-eyed demon from the Ninth Circle of Hell."

Which brings up another point I've never understood -- the thing about glowing eyes, scarlet or otherwise.  Reflective eyes, yes; many animals, especially nocturnal ones, have something called the tapetum lucidum behind the retina, which reflects back any light that makes it past the retinal receptors, giving them a second chance to catch it.  This is why, for example, the eyes of deer glow in car headlights.  (Our eyes in a camera look red not because of a tapetum, nor because of being evil hell-beasts, but because a flash photograph in dim light bounces light through our dilated pupils and illuminates the blood vessels in the retina.)

But glowing eyes?  Where's the light coming from?  Is there a little man with a flashlight inside the Mothman's eyes, shining the beam out through the pupil?  In the usual course of things, light goes into the eye, not out of it.

Anyhow, the movie was based on the almost entirely unreadable book of the same name by John Keel, which wanders around aimlessly talking about aliens and UFOs and Men in Black and so on, for two hundred pages or so.  The part that is actually about the Mothman is regrettably brief, but I guess if that's all he'd published, it would have been called The Mothman Short Story.  The gist of it is that near the town of Point Pleasant, West Virginia, in 1966 and 1967, a number of people saw something big with wings at night, and the whole thing generated a lot of hysteria, especially after the Silver Bridge, which crosses the Ohio River at Point Pleasant, collapsed on December 15, 1967.  Forty-eight people died, and the cause was later found to be a corroded I-beam, which as far as I can see has absolutely nothing to do with a giant winged creature with red eyes.

The reason this all comes up is because of a friend and long-time loyal reader of Skeptophilia, who sent me a link two days ago about how people are now seeing Mothman in Chicago.  There have been no fewer than fifty-five sightings in the past year, and eyewitnesses describe it as a "large, black, bat-like being with glowing red eyes" and "something like a Gothic gargoyle."  More disturbing, some people haven't just seen it from a distance.  Apparently it has more than once dropped onto the hoods of cars, or peered into people's windows at night.

The phenomenon has come to the attention of cryptozoologist Lon Strickler, who runs the wonderful website Phantoms and Monsters.  Strickler seems to be pretty excited by the whole thing.  "This group of sightings is historical in cryptozoology terms," he said, in an interview in Vice (linked in the first paragraph).  "For one, it's happening in an urban area for the most part and that there are so many sightings in one period."

However, Strickler says we shouldn't panic.  "These beings are less aggressive than the one in Point Pleasant, for the most part," he said.  "I believe overall there was only one being in the Point Pleasant-area that was seen during that period, while there appear to be at least three here in Chicago...  I think they're flesh and blood beings that aren’t of this world."

Which, now that I come to think of it, really isn't all that comforting.

What this once again brings home is that frustration I have with the fact that these things never happen to me.  You'd think I'd have the ideal spot -- a large, rambling house on a wooded lot with a creek, out in the middle of nowhere.  Okay, I have two dogs, which might be discouraging to monsters who are considering showing up, but allow me to reassure any Beings That Aren't Of This World who might be reading Skeptophilia that as guard dogs, these two rank only slightly above stuffed toys in terms of viciousness.  If a Mothman showed up at my window, baleful red eyes glowing in my direction, I can almost guarantee that Lena would sleep right through it.  As for Guinness, if Mothman brought along a pocketful of dog treats, or better yet, a tennis ball, Guinness would be his friend for life.

So you'd think I'd be a sitting duck.  But never, not once, have I ever seen a UFO, alien, Bigfoot, poltergeist, ghost, demon, Mothman, or Sheepsquatch.

I bet you were expecting me to say "I made the last one up."  But no, there is a Sheepsquatch, or at least some people in Virginia claim there is, although looking at the artist's rendering from eyewitness accounts, I can't think of anything it looks less like than a sheep.

So some people have all the luck.  Maybe now that I've pointed out their omission, the Mothmen et al. will be kind enough to pay me a visit.  If so, you'll be the first to hear about it.