Staying with the general linguistics angle my posts this week have been taking, today we will consider some new research that has identified the neural circuitry that underpins human language -- and comes to a startling conclusion regarding evolution and our mammalian cousins.

True language is thought to be one of the unique features of Homo sapiens.  No other species, as far as we know, has evolved symbolic communication.  Chimpanzees and gorillas can be taught the rudiments of it, and even have come up with novel expressions that have the same creativity and whimsy as human utterances -- such as Koko the gorilla naming her kitten "All Ball."  Whale and dolphin vocalizations might be symbolic language -- but most ethologists think it's simple vocal signaling, like a dog's bark or a cat's meow.

That's why we tend to think of language as a clear deciding line between "human" and "non-human."  The problem with those lines is that they don't reflect the reality of evolution -- that structures and behaviors can't come out of nowhere, and always result from modification of pre-existing genes (and the traits they generated).  So it should have been no real surprise when the FOX-P2 (forkhead box protein 2) gene was discovered in 1990, and it was found that a defect in this gene in humans causes developmental verbal dyspraxia -- a loss of motor coordination and inability to produce speech. 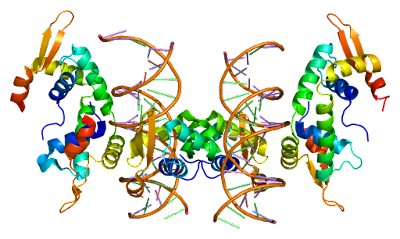 FOX-P2, the protein that allows us to speak [Image is licensed under the Creative Commons, Emw, Protein FOXP2 PDB 2a07, CC BY-SA 3.0]

So is this the "human language gene?"  That's the way it was described, but this runs up against a truth that is uncomfortable for proponents of human uniqueness -- other animals have a FOX-P2 gene, one that isn't identical to humans, but critical nonetheless.  Knocking out the FOX-P2 gene in mice causes fatal developmental disorders.  But the real kicker was that species that have complex vocalizations -- such as songbird and bats -- have a much greater diversity and much greater activity of FOX-P2 genes.

Maybe human language isn't as unique as it seemed at first.

This conclusion got another piece of support last week, with the publication in the Proceedings of the National Academy of Sciences called, "Child First Language and Adult Second Language are Both Tied to General-Purpose Learning Systems," by Phillip Hamrick (of Kent State University), Jarrad A. G. Lum (of Deakin University, Melbourne, Australia), and Michael T. Ullman (of Georgetown University).  And what their research suggests is that the parts of our brain that allow us to use language are not novel, and (very much) not unique to humans -- they are found in many other species and serve a variety of purposes.  The authors write:


Do the mechanisms underlying language in fact serve general-purpose functions that preexist this uniquely human capacity?... The results, which met the predicted pattern, provide comprehensive evidence that language is tied to general-purpose systems both in children acquiring their native language and adults learning an additional language. Crucially, if language learning relies on these systems, then our extensive knowledge of the systems from animal and human studies may also apply to this domain, leading to predictions that might be unwarranted in the more circumscribed study of language.  Thus, by demonstrating a role for these systems in language, the findings simultaneously lay a foundation for potentially important advances in the study of this critical domain...  The results have broad implications. They elucidate both the ontogeny (development) and phylogeny (evolution) of language.  Moreover, they suggest that our substantial knowledge of the general-purpose mechanisms, from both animal and human studies, may also apply to language.

"These brain systems are also found in animals — for example, rats use them when they learn to navigate a maze," added study co-author Dr. Phillip Hamrick.  "Whatever changes these systems might have undergone to support language, the fact that they play an important role in this critical human ability is quite remarkable."

So yet another blow to our sense of uniqueness, that we are somehow different from the rest of the natural world.  The same forces that generated the wombat and the cactus and the slime mold generated us, and we are deeply tied to our nearest relatives not only on the genetic level, but on the level of brain structure.  The idea that evolution could take the same basic neural circuitry and adapt it in one animal species into the ability to navigate a maze, and in a different one into allowing Shakespeare to write Macbeth, is nothing short of astonishing.

It seems fitting to end with the famous quote from Charles Darwin, the last paragraph of The Origin of Species.  "There is grandeur in this view of life, with its several powers, having been originally breathed into a few forms or into one; and that, whilst this planet has gone cycling on according to the fixed law of gravity, from so simple a beginning endless forms most beautiful and most wonderful have been, and are being, evolved."

Posted by Gordon Bonnet at 2:30 AM