Yesterday's political post resulted in five people calling me a "libtard snowflake" (or the equivalent), a recommendation to "shut the fuck up until I get past my brainwashing," a person who said he was going to laugh after November 6 when "the leftist assholes like [me] are going down in flames," and one email that I was a "partisan hack working for the disinformation specialists."  The result is that today, we'll consider a different set of issues, to wit:
Apparently the answers are, respectively:
You're probably wondering about the details by now, so allow me to elaborate.  The first story comes out of Lincolnshire, England, specifically Revesby Abbey, a Cistercian monastery that dates back to 1143.  Ron Bowers was conducting a "paranormal investigation" of the Abbey because of its reputation for being haunted, and he snapped a photograph that should be encouraging to any of us who are not looking forward to the idea of an afterlife with no cuddling.  Here's the photo: 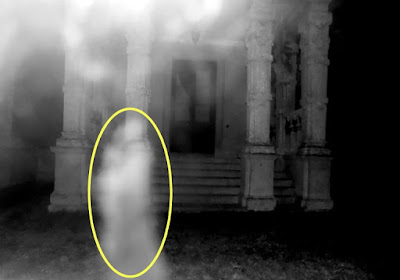 Which looks, at a stretch, like a couple hugging.  So Bowers turned the image into its negative, because there's nothing like noodling with the image if it doesn't show you what you want: 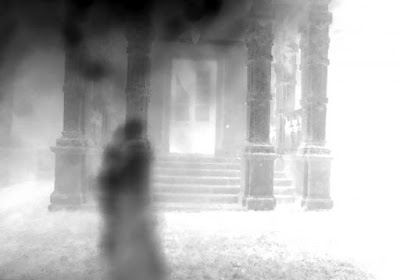 And I have to admit it's a little spooky, although as I've pointed out before, pareidolia works even on people who know what it is and realize that their sensory/perceptive systems are being fooled.

Bowers, on the other hand, is all in.  "I thought I could hear a rustling in bushes behind me before the capture of what looks like an embracing couple which led me to think it could be someone in the physical [sic]," Bowers said.  "At first, I thought it was one figure, but within a few seconds I realized it could be two – one with an arm around the other.  The arm is very prominent, and it looks like two people embracing, it looks like they are in love...  It’s nice to believe that love continues.  It’s a lovely picture and who knows maybe there is a love story there.  For me it’s a little more of a confirmation that our lives continue or that our energies can return to our favorite places.  If it is possible that we are energy, it could return to our favorite places, like homes, pubs, maybe schools and other locations.  I don’t believe I have ever had something so intimate as that picture."

The second story comes from Dreamy Draw Mountain in Arizona, where three college students from Phoenix were on a hike a few weeks ago, and had a big surprise.  The students, Allisa Miller, Jen Vickman, and Kassi Sanchez, had started out the day poorly, sleeping through their alarms, and getting up to find that it was hot out.

Which makes me wonder what they expected, in Phoenix.

"Like we didn’t want to hike," said Sanchez, whom I dearly hope isn't majoring in communication.  "Like something we had to do almost forced fun."

Despite this devastatingly tragic start, they persevered where weaker individuals would have given up, and made it up the mountain trail.  And when they got near the top, they saw...

Or an angel, or something.  They don't seem all that sure, themselves.  "We just see a silhouette of this man, it looks like he has long hair and he’s in a robe," said Miller.  "He was like right there on the top of the mountain.  We were all just kinda shocked, we just kinda sat there."

So they went up toward him, but he vanished.  Near where he was, they found an envelope stuck between two rocks.  They opened it, and found a long, rambling note quoting the bible and various Christian rock singers, signed, I shit you not, "J."  And with the note were three one-hundred-dollar bills, one for each of them.

It's a miracle!  A visitation from Jesus, who evidently stopped by the Pearly Gates National Bank on his way to Arizona!

Or maybe it's a poorly-thought-out publicity stunt.  I'll let you decide.

The last story comes from Stonehouse, Gloucestershire, England, where an "unnamed eyewitness" reports seeing a UFO close-up while out walking his dog.

"The UFO was hovering about 50 foot [sic] away from me, but we could not smell fuel or anything, I was shocked that it did not hit our house," he told a reporter for the Stroud News & Journal.  "It seemed like it was trying to fly below the radar, so it could avoid being scanned - at the time my dog was going mental at it... it looked like a huge tube with intricate ship-style rivets...  When I came across it coming through the forest I thought it must be a plane or hot air balloon, but it was clearly not and it was making sci-fi-like sounds.  Before it shot off into the clouds at immense speed the engines turned bright white, I've never seen anything like it."

Although he had his cellphone with him, he was "too shocked to take a photograph" of it.  Because of course he was.

This is apparently the second UFO sighting near Stonehouse in the past two weeks, which makes me wonder why they have all the luck.  I would love to see a UFO, or a ghost or Bigfoot or whatnot, and here I sit.  And I guarantee that I wouldn't miss an opportunity to take a photograph if I did.  I'd even remember to take my cellphone camera off the "auto-blur" setting.

So that's the news from the Wide World of Woo-Woo this week.  Affectionate ghosts, cash-dispensing messiahs, and UFOs that make "sci-fi-like" sounds and are held together with rivets.  I think we can all agree that this is preferable to a lot of silly stories about politics and neuroscience and genetics and so on.  Stories about ghosts and angels and UFOs don't result in my getting death threats or being called a "fucking ultra-left-wing looser [sic]."  Which is a little off-putting.  If you know any ghosts, you might want to mention that I could use a hug.