There's a reason that scientists don't put much faith in eyewitness accounts, and it's not just because of hoaxers and liars.

Eminent astronomer Neil deGrasse Tyson tells a story about a policeman who was driving on a winding mountain road at night, and called in to his dispatcher with a frantic account of pursuing a UFO.  The light in the sky, he said, was bright white, and was bobbing and weaving as he followed it.  Nothing natural could move that way, the policeman said.  It had to be a spaceship from another world.

It turned out that the policeman wasn't chasing a spaceship at all, he was chasing... the planet Venus.  It was low over the horizon, and as the policeman maneuvered his car along the winding road, it appeared to move back and forth.  He was so focused on the combination of keeping the "UFO" in sight and not running off the road that he honestly didn't realize the apparent bouncing about was because of his motion, not the "UFO's."

So, as Tyson put it, we need something more than "I saw it."  In science, that simply isn't enough.

Which is why the "eyewitness account" that hit the news last week from a 70-year-old New Zealander is not really carrying much weight with the scientific world.  Alec Newald gave an interview in which he finally made public a claim that in 1989, he was driving from Auckland to Rotorua, and was abducted by aliens...

"I was like what the hell is going on here?" he said.  "I was driving the car and it felt like a tonne of bricks had landed on me, like someone had poured cement on me.  I felt like I was pushed into the seat of that car.  I was paralyzed, I couldn’t turn the wheel or apply the brakes or do anything."

Shortly afterwards, Newald said he became aware that he was basically incorporeal, further supporting his guess that he was in spirit form.  "I was just like a wispy ghost with no form at all," he said.  "I found I could maneuver myself by moving my consciousness forward or sideways."

But that was only the beginning.  Newald felt a "tap on the shoulder," which is itself a little odd as I wouldn't think an incorporeal ghost would have a shoulder to tap.  But he turned, and found himself confronted by a strange sight.


Looking up, I realized we were being approached by three aliens, the tallest of them looking like my escort from earlier on.  The second one was just a little shorter and was male as far as I could tell. The third was smaller, much smaller, and walked ahead of the other two.  He, for want of a better word, was slightly built with a roundish head and rather unusual, squinty eyes which were well-spaced and placed rather lower down than are our own.  He had a very small mouth, but I did not notice any ears or much of a nose.  His physical appearance, however, was of almost no consequence, for I was immediately struck with an almost overpowering feeling of his presence.  I cannot say it was hypnotic, if anything, the opposite. It was as if his energy was being projected and absorbed by my body.

He then was told to step into a machine, which would "build a body" for him -- and that the aliens were trying to modify their own bodies so they could exist on Earth. 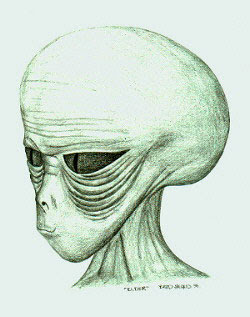 Newald says the aliens kept him for ten days, showing him around the place.  They were entirely friendly, and at the end of the time, he was returned back to Earth, and found himself back in his car on the way to Rotorua, as if no time at all had elapsed.  But despite the fact that this crazy experience had left him back where he started, he didn't find it so easy to deal with.

"It's a very hard pill to swallow," he said.  "Try absorbing that and continue to live your life as if nothing has changed...  Perhaps an even bigger surprise was, with the exception of a few, the more I tried to share this information the harder my life became.  I was ostracized by people you might have expected support from.  In fact, even before I tried to share any of the things I’d learnt, my life started to become more than difficult.  It became impossible to continue on as before."

Okay.  So here's the problem.  Alec Newald might have been abducted by aliens.  I am of the opinion -- and I'm up front about the fact that it is just an opinion, based on what I think is a logical argument but no facts whatsoever -- that life is probably very common in the universe, and chances are, there's a good bit of intelligent life out there, too.  It's possible, but less plausible, that some highly advanced civilization crossed interstellar spaces to Earth and kidnapped a dude in New Zealand for study.

But in order to be confident that this actually happened, scientists and skeptics need more than Mr. Newald's account.  It just doesn't meet the minimum standard for evidence that would be considered a reliable support for a scientific claim.  Note that I'm not saying Mr. Newald is lying; but as Tyson's story of the Venus-chasing policeman shows, our sensory-perceptive and cognitive systems are not exactly 100% reliable.  "Trust your eyes" is not what a skeptic should be saying; closer to the truth is "don't trust anyone's eyes, especially your own."

So unfortunately, I'm not jumping to the conclusion I've seen more than once in media sources that wrote about Alec Newald's claims, that this represents an unshakable support for intelligent alien life visiting the Earth.  I don't know what happened to Mr. Newald -- whether he really did get kidnapped by benevolent extraterrestrials, or he had some kind of dissociative experience, or is conflating a dream with reality in his memory, or is simply making it all up.  What I do know is that this account doesn't change the situation with respect to alien intelligence -- there's just not enough to this claim that it should be taken as proof one way or the other.