Following hard on the heels of yesterday's post about the horrifying suicide rate in the United States, and that overhauling mental health care needs to be a priority, last night I ran into a study showing that such debilitating conditions as anxiety and paranoia can be ameliorated significantly by using virtual reality therapy.

I can vouch for the difficulty of going through traditional therapy for depression and anxiety.  I have (at the time of this writing) been at one time on another on four different antidepressants and three different anxiolytics.  There was a merry carousel of nasty side effects, including thermonuclear-level acid reflux, a drop in libido to nearly zero, overwhelming fatigue, a loopy, disembodied sensation, and nausea.  One of the antidepressants had the effect of amplifying my anxiety to the point that I felt like I was in a mental lightning storm, and had nearly constant suicidal ideation.  (They took me off that one pronto.)  Another one worked, at least to some extent, but evidently my body habituated to it and the positive effects didn't last.

So the idea that there are other options is a real godsend to people like me, who fight mental illness every single day.  And the initial trials with virtual reality therapy show that it is at least as good as conventional therapy -- and doesn't come with side effects.

One patient in the study, a young man with paranoid schizophrenia, practiced for three months using a headset that brought him into the VR world of a coffee shop filled with people.  The patient and the researcher could adjust the controls to change the number, proximity, and friendliness of the people in the shop.  When an anxiety-producing situation is encountered, the patient is asked questions like, "What other explanation could there be for why the man in the red shirt is frowning at you?"

After the duration of the therapy, the young man's anxiety and paranoia had decreased significantly -- to the point that he was able to perform in a poetry slam in front of five hundred people. 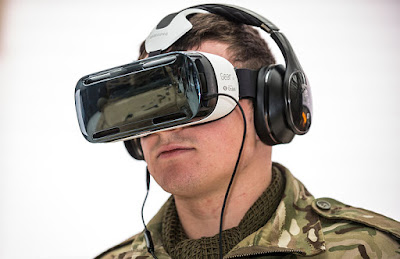 The study, which appeared in the journal Lancet earlier this year, was a joint effort between researchers from several universities in the Netherlands.  "The key ingredient to an effective treatment for anxiety disorders is … you need to face your fears," says Stéphane Bouchard, a clinical cyberpsychologist at the University of Quebec in Outaouais, Canada.  But instead of throwing patients out into a real world with real triggers -- social situations, spiders, heights, confined spaces, whatever -- mental health professionals (or the patients themselves) can control their exposure and dial up the intensity only when they feel like they're ready.

The reason it works is that it allows people to encounter the sources of their anxiety, and experience the emotions they elicit, in a completely safe environment.

That doesn't mean it's easy.  A VR program to ease arachnophobia caused one woman to draw her legs up onto her chair and sit like that for fifteen minutes.  "I’m not sure if anyone ripped the headset off," said Philip Lindner, a clinical psychologist at Stockholm University, "but a lot of people definitely started crying."

The technique has shown promise in treating PTSD, and there is now a program at Emory University in Atlanta to use it in treating Iraq War veterans who were left with lingering mental scars from the trauma they endured.

So I'd gladly volunteer to try this.  Given the relatively poor track record -- with me, at least -- of conventional therapy and medications, I'm certainly game to try something different.  So if VR headsets to treat anxiety become available, sign me up.