A few years ago, I wrote a post here at Skeptophilia called "Grass, gulls, mosquitoes, and mice," in which I laid out the argument that while evolution is usually slow, sometimes it's so fast we can see it happening before our very eyes.  And when that happens, the anti-evolutionists amongst us have some explaining to do.

It's always nice to have another arrow in your quiver, and that came in a recent paper in Nature called, "Rapid Morphological Change of a Top Predator With the Invasion of a Novel Prey," by Christopher E. Cattau, Robert J. Fletcher Jr, Rebecca T. Kimball, Christine W. Miller, and Wiley M. Kitchens, all biologists at the University of Florida, who have been studying Snail Kites, a rare bird of prey found in the Everglades (and, as you'll see, in a few other places).

The Snail Kite, as you might expect from the name, is a specialist predator that feeds only on apple snails, a large species of freshwater gastropod found in the Everglades.  They have hooked beaks for removing the meat from the snail, and taloned feet for holding onto the shell -- well adapted for their niche. 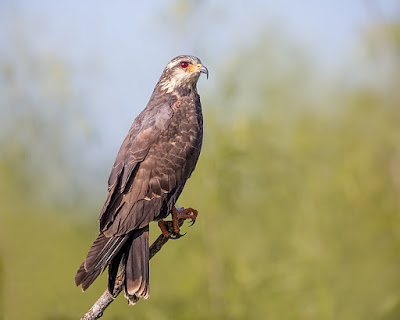 [Image licensed under the Creative Commons, photograph by Andy Morffew]

When an exotic species replaces a native species upon which other animals depend for food, the usual result is a drastic blow to the pre-existing food chain.  Here, though, we have a different result -- an eye-opening response by the Snail Kites that recalls evolutionary biologist Alan Grant's comment in Jurassic Park that "nature finds a way."

As is, the Snail Kites in Florida were not equipped to prey upon the island apple snails -- their feet were too small to hold onto the shells, not surprising as the snails are five times larger than the native Florida apple snails.  But the expected drop in the bird's numbers didn't happen.  Instead, in only a couple of generations, selection was so powerful on the population that the average talon size and bill size increased measurably, and the alterations were reflected by changes in their DNA.

"Nobody would believe me," said Robert Fletcher, co-author of the study, when the findings were announced. "They said, 'No, that cannot be. It's too quick.'"  But even the naysayers were convinced when the introduced snail species showed up in huge numbers in one part of the Snail Kite's range, and instead of leaving the premises, nearly all of the nearby kites converged on the spot.

I guess birds like an all-you-can-eat buffet as much as the rest of us do.


[T]rends in predicted breeding values emphasize that recent morphological changes have been driven primarily by phenotypic plasticity rather than micro-evolutionary change.  Our findings suggest that evolutionary change may be imminent and underscore that even long-lived vertebrates can respond quickly to invasive species.  Furthermore, these results highlight that phenotypic plasticity may provide a crucial role for predators experiencing rapid environmental change.

It's good news for the kites, but it bears mention that a lot of times, the introduction of an exotic species can spell disaster for native ones.  The kites were lucky in that there was already a range of bill sizes because of spontaneous mutations, and the new prey acted as a selecting agent, favoring the largest-billed and largest-footed individuals.

The most interesting part is that once you set this in motion, it ultimately will split the population from related populations elsewhere.  I first saw Snail Kites in Belize, where there are no island apple snails, so the pressure to cope with bigger prey doesn't exist.  Given time -- and, apparently, less time than anyone thought -- the population in Belize and the one in Florida will diverge genetically to the point that they will be, by anyone's definition, different species.

So there you have it: another example of evolution in action.  Cool enough for anyone to appreciate, but for evolutionary biologists, this is nothing short of spectacular.  We can add this to the list of times we've actually observed species evolving quickly enough to see it happen -- which is one more nail in the coffin of strict creationism, not that we particularly needed another one.