Heard about the Irish UFO?

I'd resisted posting about this one, because every single time I run into an article that says "TOTALLY UNEXPLAINABLE EXTRATERRESTRIAL OBJECT SIGHTED," it turns out not only to be explainable but 100% terrestrial.

This one, however, has me curious.  According to a report in The Drive, this incident has two things that made my ears perk up; it was simultaneously sighted, and reported, by several people, including three commercial airline pilots; and according to witnesses, not only was it going ridiculously fast (one of the pilots said it was at least Mach 2), it changed direction several times.

That last bit is the most important.  One of the most common things labeled as a UFO are meteors, but as far as I understand them, they move in a straight line because (1) Newton's First Law is strictly enforced in most jurisdictions, and (2) they're a bitch to steer.  So if the reports are correct that it changed direction, not once but several times, this raises the report to the level of "pretty interesting." 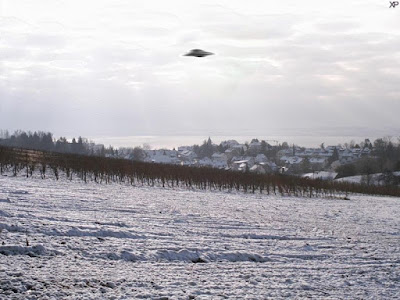 
Publicly available audio of conversations between the passenger planes and Shannon Flight Information Region air traffic controllers offer more detail about what happened. At 6:47 AM local time [on November 9], a British Airways 787, using the callsign Speedbird 94, radioed in to ask if there were any military exercises going on in the area, which there were not.

"There is nothing showing on either primary or secondary [radar]," Shannon controllers told Speedbird 94. “O.K. It was moving so fast,” the British Airways pilot responded.

She further explained that the object had appeared as a "very bright light" and had flown along the left side of their 787 before it "rapidly veered to the north" and then "disappeared at very high speed." There is no indication of concerns about a possible collision.

The Irish authorities are investigating, but it remains to be seen what there is to investigate, given that all we have is the recording of what the pilots said they saw.

As regular readers know, I've been pretty skeptical of eyewitness accounts.  Not only is the human sensory-integrative system notoriously inaccurate, so is our memory.  But here we have at least three trained pilots -- who had seen phenomena like meteors many times, and knew what they looked like -- reporting the same strange, maneuverable object simultaneously.

Astronomer Michio Kaku famously said -- and got himself in trouble with the scientific establishment for saying it -- "Ninety-nine percent of all UFO sightings can be explained as hoaxes or purely natural, and in many cases terrestrial, phenomena.  But that still leaves one percent that haven't been explained.  And I think those are worth a serious investigation."

Which I have to agree with.  And unless there's more to this story that we're being told (for example, Irish authorities denied conducting military exercises in the area where the sightings occurred, but it's entirely possible they could be hiding the truth for some reason), this falls squarely in Kaku's investigation-worthy one percent.  I'm definitely not ready to jump to "it was a visit by intelligent aliens from another world," but I'm at this point eager to hear what the experts think actually did happen in the skies of Ireland six days ago.