Just last night my wife and I watched the Dr. Who episode "Vincent and the Doctor," from 2010 (one of the episodes of the Eleventh Doctor, played by Matt Smith).  In it, he and his companion, Amy Pond, go back to Auvers-sur-Oise, France, in 1890, where they meet Vincent van Gogh.

Well, it turns out that van Gogh is having a hell of a time, and not just because the townspeople in Auvers think he's a nut and his paintings are trash.  (Which, apparently, they did in real life.)  Van Gogh is being hunted by a giant reptilian/avian monster called the Krafayis, which kills people but doesn't eat them -- and the twist is that for reasons never explained, van Gogh is the only one who can see it.

Okay, I have to admit when I summarize it that way, it sounds pretty fucking stupid.  But it's a really good episode, and I say that not just because I've become something of a Dr. Who fanatic.  It's a seriously bittersweet story, very well written, and Tony Curran's portrayal of van Gogh is spot-on.  And if the end doesn't make you cry, you have a heart made of stone.

The reason this comes up is because by some sort of odd synchronicity, I ran into a report from the site Mysterious Universe this morning that a beast that no one has been able to describe has (as of the point the article was written) injured twelve people, not in France (that would have been too much of a coincidence) but in the village of Dapodi, in the state of Maharashtra, India.  Like van Gogh's Krafayis, whatever is doing this makes a lot of noise, attacks people out of the blue and mauls the hell out of them, then disappears.

And this is one even the skeptics can't scoff at, because whatever's behind it, the injuries are quite real.  One of the victims, 35-year-old Kailas Pawar, suffered major head injuries, required 45 stitches to put him back together, and is still in the hospital.  The people who were attacked were sleeping outdoors, common in this sweltering climate. 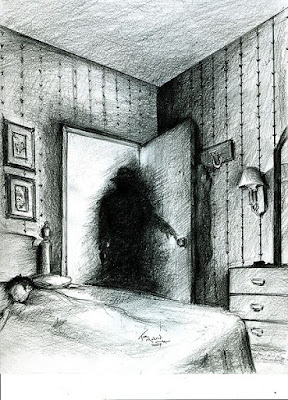 At first, officials thought the culprit might have been a leopard, but leopards are familiar animals to people in that region of India, and the victims swore up and down that's not what attacked them.  But when it came to describing what did attack them, things got oddly vague.  According to forest ranger M. N. Hazare, who spoke with several of the victims, "We showed the injured people photographs of leopards, hyenas, and even foxes, but they could not identify it.  They only said that the animal was larger than a dog.  Leopards normally attack their prey and drag them, but this has not happened here.  A hyena does not attack people sleeping in groups. So we are not able to ascertain which animal attacked so many people...  This is flat terrain.  There is a jungle along Bhima River, about ten or twelve kilometers away.  We don’t think a leopard would have come this far away."

I must say, the attacks are odd.  Unless an animal is rabid, most animals will attack people only when they feel threatened.  It's hard to see why an animal would repeatedly maul people sleeping near homes in a decent-sized village.  The other possibility is that the animal was hungry -- but animals that will hunt, kill, and eat humans are fortunately very few in number (a few documented cases have been the result of mountain lions, polar bears, and tigers).  And besides, none of the victims were dragged away and eaten.

All the thing did is pounce, beat the poor people to a pulp, and take off.

What's oddest is that no one has been able to describe it.  You'd think being clawed to within an inch of your life would sharpen your senses pretty well, but nobody has been able to refine the description past "big animal," which you could presumably figure out just from the nature of the attacks.  Of course, the attacks occurred at night in a village where I doubt there are streetlights, and the victims were roused out of a sound sleep by being bitten and scratched, so I suppose it's understandable that during the attack, "getting a good look at the attacker" took second seat to "figuring out how not to die."  But it's still strange that none of the victims could give any sort of description.

So right now, officials in Dapodi are discouraging people from sleeping in the open, and they're trying to keep an eye out for any big animals that aren't behaving themselves.  The problem is, if it's a Krafayis, they wouldn't see it anyway, unless they happen to have a brilliant but half-mad painter handy.

Okay, maybe it's just a leopard.  Stranger things have happened, and my desire to have it be something out-of-the-ordinary is just wishful thinking.  Still, if there's a whooshing noise, and a blue police box appears, and a disheveled man in a bow tie comes out with a gorgeous red-haired woman with a Scottish accent, somebody damned well better let me know.  I'll be on the next flight to India.