Notes from the other side

I'm going to take a short break, for the rest of the week -- but I'll be back next Monday, November 26, so keep sending me links and ideas!

A friend and loyal reader of Skeptophilia sent me a link that I knew was going to be good even before I opened it, because it was from a site called Daily Vibes.  First, one of my pet peeves is the way people use words like "vibration" and "frequency" to basically mean "any damn thing we want," and I figured the "vibes" part presaged a lot of that sort of thing.  But I was even more excited when I perused their home page and saw a list of recent articles, which include the following:
So I started reading the various posts, and very quickly ran into a troubling problem: what if your zodiac sign says basically the opposite of what you learn from how you sit?  Because I found that the way I like to sit means I'm outgoing, dynamic, dress well, have high goals and aspirations, and have a difficult time taking criticism.  My zodiac sign, on the other hand, says that I'm mysterious, aloof, and secretive, hard to get to know, and very moody.  So am I both?  Or somewhere in the middle?  Because right now, I'm confused as to whether I should smile and schmooze with people, or wear a black cloak and just give people a meaningful raised eyebrow to make them uncomfortable.

Then I had to give a look at the one about crying, because I'm one of those people who is very easy to launch into a complete tear-o-rama.  My wife was at an art show this past weekend, so Saturday evening I decided to sit on the couch with my dog, drinking wine and watching Dr. Who.  I rewatched one of my favorite episodes, "The Girl in the Fireplace," and ended up hugging my dog and sobbing into my wine glass.

Okay, it's a pretty sad episode, but geez.  I mean, it's not like it's the first time I've seen it, or anything, so you'd think I'd have been somewhat immunized.  But no.  There I sat, blubbering like an idiot. 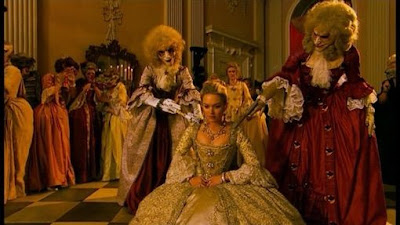 At least my dog understood.

Anyhow, I was curious about what Daily Vibes had to say about crying, and I was heartened to find out that because I cry a lot, I don't care what other people think about me, and I'm brave.  I also learned that crying "relieves stress and pent-up emotions... [removing] negative emotions and [instilling] positive ones."  In that respect, we're told, "it's almost as effective as sex."

So next time your significant other is feeling amorous, you should turn to them and say, "Not now, honey, I think I'd prefer to have a nice long cry instead."

Oh, and if you have a feather tattoo, you're "strong, independent, courageous, and cherish freedom."

Anyhow, all of this is sort of beside the point, because the article that my friend sent me the link to was none of the above, but was to a post called "Five Signs Your Deceased Love Ones Are Trying to Help You."

Naturally, I was curious about what they thought were signs that Grandma Bertha was still hanging around, and I suspect you are, too, so without further ado:

If this were true, it would mean my house has been continuously haunted for years, because in my experience my pets act strangely all the time.  For example, I went outside this summer because our coonhound, Lena, was having a complete barking fit, dancing around yapping like mad.  I thought she had a possum cornered, but no.  When I came up to her, I found out she was barking at...

To be fair, it was a pretty ferocious-looking stick.  But still.

I hear bumps and creaks and knocks in our house all the time, but I think that's mostly because (1) it's an old house, and (2) there's a family of squirrels that we have been unable to evict from our attic.  I haven't seen anything else really suspicious on this front, so this one would have to be in the "no" column for me.

On the other hand...

I am halfway convinced that my mere presence makes computers malfunction.  My school computer, for example, frequently and unpredictably decides to draw little gray Xs on all of my document icons, and the only solution is to restart the computer, which takes fifteen minutes because this particular machine is powered by a single hamster running in a wheel.  It's kind of a relief to find out this is caused by ghosts, because I was beginning to think I'm just a techno-idiot.

This one is also in the "yes" column for me.  Last night I woke up in the middle of the night because I was dreaming that I was defending our back yard from a flock of very threatening owls.  So my dreams tend to not be just "vivid," but "really fucking weird."  And if this is Grandma Bertha's fault, I wish she'd lay off, because I need my sleep.

For this one, the site says, "ESP is a pretty wide umbrella in terms of definition. It can mean a bunch of different things.  But in this case, it’s as if the spirits in our lives put ideas in our heads before we can have them."

Well, I'm always coming up with strange ideas, which is why I'm an author, because I can write out bizarre ideas that pop into my head and people pay me to read about them.  But I don't think that's ESP.  It may be, as one of my friends once speculated, because I was dropped on my head as a baby.

So the checklist for whether my house is haunted generates mixed results, which I suppose is to be expected.  Myself, I think it's not haunted, although my younger son swears that he's seen a shadowy figure out of the corner of his eye, moving about in our basement.  Maybe that's Grandma Bertha, I dunno.  If it is, I wish she'd stop simply oozing about the place and do something useful, like telling me her chocolate fudge recipe, which I've tried unsuccessfully for years to reproduce.

But I need to wrap this up, because I have to go see what Lena's barking at.  Maybe it's another stick that is attempting to launch a vicious attack on her.  You know how it goes.