You might recall that when Hurricane Sandy struck the East Coast in October 2012, devastating large areas and taking 147 lives, we were quick to find out what had caused the monster storm.

It wasn't warm water and low shear in the western Atlantic.  It wasn't, in a larger sense, due to climate change providing more heat energy to juice up big storms.  No, it was caused by the most powerful meteorological force known:

This, at least, was the contention of John McTernan, who said that Sandy was divine punishment for our acceptance of LGBTQ people.  Which makes me wonder why God's aim is so bad.  Sending a huge-ass storm to target one, fairly spread-out group of people, is poor planning.  My guess is just as many holy people were harmed by Sandy as unholy ones.

It's nice to know, though, that our LGBTQ friends aren't the only ones who are capable of stirring up killer storms.  On right-wing commentator Chris McDonald's show The McFiles, we learned a couple of weeks ago that Hurricane Florence was created by Democrats to destroy any evidence that they're committing massive voter fraud in North Carolina.  Here's the exact quote:


I saw where North Carolina had done the voter fraud stuff for the machines, for this, that, and the other; they had caught it or something like that and they were going after it.  I said, ‘Oh boy.’  Sure enough, there is was; here comes the hurricane.  Bigger than life, there is was.  And I just found out, literally, though another source of mine, contact this morning, sure enough, they said it was in fact made by man and generated by the HAARP system, basically, and it was meant to try and flood North Carolina and flood out the evidence of what was going on with the voter fraud.

My opinion is that if Democrats could create and steer storms, there'd already have been tornadoes at Lindsay Graham's doorstep. 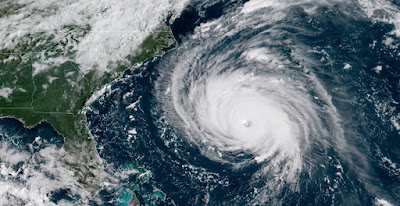 But as we've seen before, there's no claim that is so completely batshit crazy that it can't be bettered, and we saw this last week with a proclamation by Mark Taylor, the self-styled "firefighter prophet," who said that we've seen yet another storm that has nothing to do with plain old ordinary meteorology.  Hurricane Michael, which devastated the panhandle of Florida, was sent there by Democrats because they're angry about Supreme Court Justice Brett Kavanaugh.


Does anyone else think it's strange that Justice K is sworn in and we have a major hurricane inbound?  DS scared?  They should be.  Retaliation?  Absolutely.  We will not be intimidated.  Warriors arise, time to go to work!  You know what to do...

Okay, I have just a few questions about this.
So anyhow.  I can pretty much guarantee that none of the above-mentioned storms were generated by anything but atmospheric conditions at the time, and no one is able to summon a storm on command and then steer it.  Maybe God can, I dunno.  I'm certainly no expert in that realm.  But even he seems to be a little sketchy about the "steering" part.

I know that's kind of prosaic, and not nearly as interesting as divine retribution or evil HAARP-using Democrats or gays generating hurricanes with their giant rainbow-colored Storm-o-Matic.  But really, people.  Get a grip.  We're coming into snow season here in the Frozen North, and we have enough trouble with the ordinary kind of weather.  If every time we have a Winter Storm Warning I have to worry about whether it's an ordinary storm or some group with a vague vendetta creating bad weather to make me miserable, it's gonna be a really long winter.