The creature from Nova Scotia

My friend and fellow author and blogger, Andrew Butters (who writes over at Potato Chip Math), sent me a link this morning that positively warmed my heart.

It's about obscure microorganisms that live in dirt in Nova Scotia.  Okay, I know that's an odd thing to have your heart warmed by, but look, this is cool.  The microorganisms are called hemimastigotes, and they've been known for a while, but this new find allowed scientists to do a detailed genetic analysis -- and what they found is astonishing.

Hemimastigotes don't belong in any of the six kingdoms currently accepted by taxonomists -- Archaea (a strange group of sort-of bacteria), Eubacteria (all the other bacteria), Protista (single celled eukaryotes like Amoeba and Paramecium), Fungi, Plantae, and Animalia.

They're most similar, at least superficially, to primitive animals, but their DNA shows that the evolutionary distance between hemimastigotes and animals is greater than the evolutionary distance between you and bread mold.  So calling them "animals" is completely unsupportable, unless you want to call mushrooms animals, too.  The last common ancestor between hemimastigotes and anything else on Earth is over a billion years ago.

So hemimastigotes give new meaning to the word outgroup. 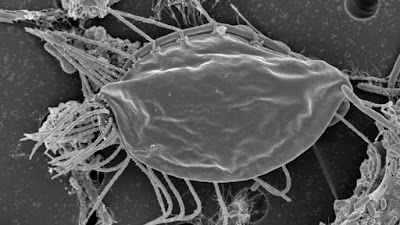 If you're curious about the beast's odd moniker, the species name, "kukwesjijk" means "little hairy ogre" in Mi'kmaq, the language spoken by the indigenous inhabitants of Nova Scotia, where the discovery was made.

The study, done by Gordon Lax, Yana Eglit, Laura Eme, Erin M. Bertrand, Andrew J. Roger, and Alistair G. B. Simpson, appeared in Nature last week, and is nothing short of jaw-dropping.  These strange creatures (the hemimastigotes, not Lax et al.) have little harpoons called extrusomes that they used to skewer single-celled prey, flagella that pull the hapless microorganism toward its mouth, and then they suck out the cytoplasm.

Which is pretty hard-core.

The scientists have raised a colony of hemimastigotes in their lab, so they have more to study -- I must reiterate how incredibly rare they are, having been seen only a handful of times since their discovery in the late 19th century.  "It's "extremely exciting that it's still possible to discover something so different from all known life on Earth," Eglit told reporters for the CBC.   "It really shows how much more there is out there."

Indeed.  That's why I love science; there's always more to learn, always new realms to explore, and it has this funny way of coming up behind you and astonishing you just when you thought you had everything figured out.

Now, y'all'll  have to excuse me, because I need to go rewrite my notes for the taxonomy unit in my AP Biology class.