The origin of oxygen

One of the (many) things I love about science is the fact that for every discovery made, a slew of new questions open up.

Sometimes, "a slew" doesn't even cover it.  There have been discoveries that have revolutionized entire fields.  For example, when J. Tuzo Wilson, Harry Hess, and others developed the plate tectonics model in the early 1960s, to explain the magnetic mapping of the Atlantic Ocean, it explained a whole lot of other things -- why there are always volcanoes near oceanic trenches, why the coastline of North and South America fits together with Europe and Africa as if they were puzzle pieces, why the Himalayas are not volcanic, but are an earthquake zone (and are, in fact, still rising).  But it opened up a huge number of other questions -- why volcanoes in different spots have different characteristics (for example, the hot, fluid lava of Kilauea as compared to the monstrous explosions of Mount St. Helens and Vesuvius), why coastal California is made up of dozens of unrelated chunks of rock (which go by the delightful name of "suspect terranes"), and -- most importantly -- what force is driving the entire process.

Geologists are still devoting their careers to understanding the outfall from that one discovery.

A study published earlier this month in Geobiology has that characteristic of good science -- of solving one question and in the process opening up lots of others.  Called, "The Early Archean Origin of Photosystem II," by Tanai Cardona and A. William Rutherford of Imperial College of London, Patricia Sánchez‐Baracaldo of the University of Bristol, and Anthony W. Larkum of the University of Sydney, at first seems as if it would only be of interest to people who are fascinated with the gruesome biochemical details of photosynthesis.  Photosystem II is an array of proteins and pigment molecules that forms one of the two "light traps" in chloroplasts (the other, unsurprisingly, is called "photosystem I").  So who, other than botanists, really cares when it evolved?

Well, it turns out that the timing of this event is mighty peculiar -- because apparently photosystem II, central to the glucose-production system of all plants, arose around 3.4 billion years ago -- 700 million years before the earliest known autotrophs, the cyanobacteria (commonly called "blue-green algae").

The way this was discovered was a technique called a molecular clock -- using a known mutation rate for a specific gene to estimate when related genes in different organisms had a common ancestor.  (As a wildly oversimplified example, if you know that the rate of mutation in a particular gene cluster is 1 base pair change per million years, and that gene cluster in species A has 23 differences from the related gene cluster in species B, you can infer that the most recent common ancestor between A and B occurred 23 million years ago.)

Here, the researchers looked not at genes in two different organisms, but two different proteins in the same organism -- photosystem I and photosystem II, the genes for which were once a single piece of DNA that diverged in two directions.  And if you use the molecular clock technique to estimate when the common ancestor of those two genes was, you get a number way bigger than anyone expected. 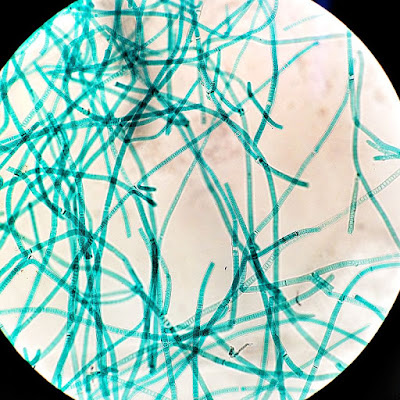 This is strange.  The geological evidence is pretty clear that earlier than 2.7 billion years ago, the atmosphere had no free oxygen.  So if photosynthesis -- the major oxygen-producing activity on Earth -- evolved 700 million years before significant quantities of oxygen accumulated in the atmosphere, it raises two awkward questions:
I'm sure these questions have perfectly rational answers.  It's possible cyanobacteria evolved a lot earlier than we'd thought -- after all, they're not common as fossils.  It could be that at first some biological or geological process was locking up the oxygen as soon as it was released, so it took a long time for it to start building up to levels that would leave a discernible fingerprint in the rocks.  It could be that something's confounding the molecular clock data and causing it to give an inaccurate result -- although in reading the paper, to my only moderately-trained eye, this doesn't look at all likely.  The analysis was careful, thorough, and painstaking.

It could also be that the earliest photosystems were simply much less efficient than today's, so their ability to oxidize water was insufficient to lead to an oxygen buildup in the atmosphere.  Or that the ancestral gene/protein for today's photosystems had a different purpose for the organisms that had them, and only afterwards was co-opted to store energy and synthesize food -- a phenomenon called preadaptation.