The worst century in history

I've always loved a mystery, and for that reason, the European "Dark Ages" have fascinated me for as long as I can recall.

But the moniker itself is off-puttingly self-congratulatory, isn't it?  It's not like Roman rule was that pleasant for your average slob to live under, after all.  Be that as it may, after the conquests of the Roman Empire started to fall apart in the 4th century C.E. from a combination of invasion, misrule, and downright lunacy, things went seriously downhill.  Life was pretty rough until the 8th and 9th centuries, when some measure of order returned as damn near all of Europe coalesced around the Roman Catholic Church, ushering in the Middle Ages.  And what we know about the period in between is... not a hell of a lot.  Accounts are scattered, vague, and full of conflation with mythology and legend.  The few that were written by contemporaries, rather than long after the fact -- such as Gregory of Tours's History of the Franks -- contain as much hagiography as they do history. 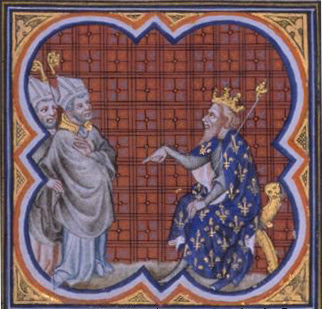 Which is why I was thrilled to read a paper that appeared last week in Antiquity about a study of the "worst decade to be alive" -- 536-546 C. E.

The research, which combines the skimpy evidence we have from accounts written at the time with hard scientific data from analysis of ice cores, paints a grim picture.  Writings from the year 536 describe a mysterious "fog" that lasted for eighteen months, generating widespread crop failure and what one Irish cleric called "three years without bread."  From the ice core analysis, medieval historian Michael McCormick and glaciologist Paul Mayewski identified what they believe to be the culprit: a cataclysmic volcanic eruption in Iceland that dropped the global temperature an average of two degrees Celsius in a matter of months.

This was followed by another eruption in 540, and the following year, the single worst plague on record -- the so-called "Plague of Justinian," which killed between a third and a half of the inhabitants of the Eastern Roman Empire, and resulted in so many corpses that people loaded them on ships and dumped them in the Mediterranean.  The disease responsible isn't known for certain, but is believed to be Yersinia pestis -- the same bacterium that caused the Black Death, almost exactly eight hundred years later.  But to give you an idea of the scale, there's reason to believe the Plague of Justinian dwarfed both the 14th century Black Death and the Spanish Flu of 1918-1919 -- usually the two examples that come to mind when people think of devastating pandemics.  The death toll is estimated at sixty million.

There probably was a connection between the cold and the plague, too, although not the obvious one that famine triggers disease susceptibility.  Many scholars think that the lack of food, and cold temperatures following a period that had generally been warm, forced mice and rats into homes and on board ships -- not only in close proximity to humans, but in their means of travel.  The fleas they carried, which are vectors for the plague, went with them, and the disease decimated Europe and beyond.

The effects of the eruption, however, were felt all over the Earth.  Tree ring analysis from North America shows 540 and the years following to have been unusually cold, with short-to-nonexistent growing seasons.  Volcanic dust is found in those layers of ice cores everywhere they exist.  Famines occurred in Asia and Central America.

All in all, a crappy time to be around.

Things didn't rebound for almost a hundred years.  Archaeologist Christopher Loveluck, of the University of Nottingham, found traces of dust containing significant amounts of lead in ice strata from the year 640, which he believes were due to a resurgence in silver smelting for coinage.  (I suppose if there's a hundred years during which your three main occupations are (1) not starving, (2) not freezing, and (3) not dying of a horrible disease, then making silver coins is kind of not on your radar.)  And the tree rings and ice cores bear out his contention that this indicates better conditions; although there were a couple of other volcanic eruptions we can see in the glacial records, none were as big as the one in 536.  The silver smelting, Loveluck says, "... shows the rise of the merchant class for the first time."  Things, finally, were improving.

What's coolest about this study -- despite its gruesome subject -- is how hard science is being brought to bear on understanding of history.  We no longer have to throw our hands up in despair if we're interested in a time period from which there were few written records.  The Earth has recorded its own history in the trees and the glaciers, there for us to read -- in this case, telling us the tale of the worst century the human race has ever lived through.