Vote for your life

I made a comment a couple of days ago on social media that American citizens should vote on Tuesday as if their lives depended on it -- "because they do."

One person who responded to this said, "Come on.  Stop with the alarmist talk, it doesn't help anything or anyone.  My life depends neither on whether I vote nor who I vote for."

My response is that privilege will do that to you.  But you'd have to be blind not to see that not all Americans are so fortunate, and making this claim implies that you don't give a rat's ass what happens to them.  What I said was neither hyperbole nor a ham-handed attempt to stir people up; it was simply a fact, if not for everyone, for a great number of people who are finding their rights curtailed and in some cases their identities legislated out of existence.

Let me give you just one example -- Representative Matt Shea, of Washington State, who is on the ballot for re-election on Tuesday.  Shea is a religious nut job who just published a four-page "manifesto" outlining what should be our approach to fighting wars on God's behalf.  The part that stands out is this:


Yes -- there is a man running for Congress, as an incumbent, who believes that I (as a male supporter of same-sex marriage, and someone who doesn't obey biblical law) should be killed.

Sheriff Ozzie Knezovich, of Spokane County, has turned over the "manifesto" to the FBI.  As well he should.  It is a direct, specific threat against a (large) group of American citizens based on one thing and one thing only -- religion.  If someone can explain to me the difference between this and ISIS's continual cry of "kill all the infidels," I'd appreciate it. 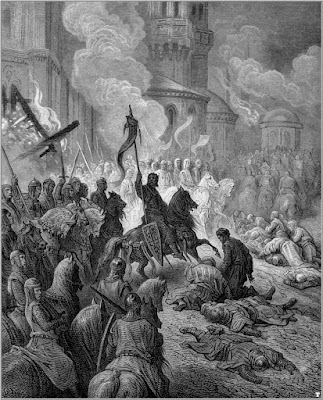 Gustave Doré, Entry of the Crusaders into Constantinople (1877) [Image is in the Public Domain]

As for Shea, he said the comments were "taken out of context," making me wonder in what context they could possibly be put that would make them acceptable to any reasonable human being.  "First of all, it was a summary of a series of sermons on biblical war in the Old Testament as part of a larger discussion on the history of warfare," Shea said in a video.  "This document, in and of itself, was not a secret. I’ve actually talked about portions of this document publicly."

Which I'm calling bullshit on.  If you read the document, he is clearly not outlining, in some kind of academic way, the rules of holy warfare in Bronze-Age Israel.  He goes into some detail about the command structure of God's Army, using terms like "corporal," "sergeant," "captain," and so on.

Now, I'm no biblical scholar, so correct me if I'm wrong, but my sense is that these are not terms that were used by Joshua's soldiers at the Siege of Jericho.

Oh, and he says that to be part of God's Army, guys need to be circumcised.

Is it just me, or are these ultra-religious nutcakes really fascinated by guys' naughty bits?  I swear, people like Shea care more about what I do with my dick than I do.

The scariest part of this is that this is not some lone loony crying out in the wilderness; this guy is in a credible position of being re-elected.  Not surprising considering our leadership; Vice President Mike Pence is himself an evangelical hard-liner, to the point that after the shootings at the Pittsburgh synagogue last week, he couldn't even bring himself to get an actual Jewish rabbi to offer words of comfort.  The guy who did the speaking -- Loren Jacobs -- is a member of the "messianic Jews," sometimes called "Jews for Jesus," who believe that Jews in general are destined for hell, and will only be saved if they accept Jesus.  (The other upside, I guess, is that they get to keep their cultural Judaism, which is why people like Jacobs don't speak of this as an actual conversion.)

So yes, voting for one of these people is saying that you don't care if people in demonized groups live in peace or get murdered.  At least own up to it and stop trying to soft-pedal the truth.

In my fifty-odd years of being aware of politics, next week's election is far and away the one that is the most crucial.  It feels like we're at a crossroads between turning our nation around, reclaiming the tolerance and acceptance that have always been part of our national heart, or accelerating the slide into fascism.  So let me amend my statement in the previous paragraph; not only is voting for people like Shea accepting Trump's brutal, ultra-Christian, white nationalist view of what the U.S.A. should be, not voting is the same thing.  Because it's fucking well certain that the people who are on Shea's side -- and Trump's -- are not going to sit this one out.

So next Tuesday, vote.  Shed your complacency.  Find others who aren't sure if they want to make the effort, and give them a gentle nudge.  Offer to drive people to the polls.  If we can't do this, I fear that we are in for a very, very dark time ahead.