My question today is one that haunts many skeptics -- the question of how one would know if a bizarre claim was actually true, especially in the absence of evidence.

The hardest-nosed of us would probably object to the premises of the question; if there is no evidence, they would say, then there is no basis on which to make a judgment in the first place.  While I agree with that general attitude -- and have applied it myself on numerous occasions -- it always leaves me with the worry that I'll miss something, and just through the weakness of the evidence and my preconceived notions I won't see the grain of wheat in amongst the chaff.

I riffed on this whole idea in my novel Signal to Noise (and if you'll allow me a moment of shameless self-promotion, it is available at Amazon from the link on the right side of the page).  In the story, a skeptical wildlife biologist, who had decided that all woo-woo claims are bullshit, is confronted with something bizarre going on in the mountains of central Oregon -- and has to overcome his preconceived notions even to admit that it might be real.  In the story, it doesn't help that the news is delivered to him with no hard evidence whatsoever, by a total stranger who just "has a feeling that something is wrong."  (I won't tell you any more about it; you'll just have to read it yourself.   And at the risk of appearing immodest, I think it's a pretty damn good story.)

The reason I bring all of this up is a website called Little Sticky Legs: Alien Abductee Portraits, owned by Steven Hirsch.  On this website, which you should definitely take a look at, there are photographs of a number of people who claim that they were abducted by, or at least contacted by, aliens, and their first-hand accounts (and in some cases drawings) of their experiences.  I thought this was an unusually good example of the phenomenon I've described above, for a variety of reasons.

First, the accounts are weird, rambling, and disjointed, and many of them seem to have only a loose attachment to reality.  Second, the photos don't help; whether Hirsch deliberately set out to make his subjects look sketchy is a matter of conjecture, but my sense is that he was playing fair and this is the way these people actually look.  Some of them, not to put too fine a point on it, are a little scary.  And third, of course, the content of the accounts is fairly contrary to what most scientists think is realistic.  All of these things combined seem to put them squarely into the category of most of the subjects of this blog; bizarre, possibly delusional, nonsense. 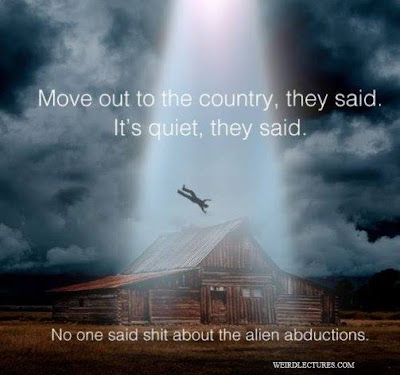 But reading the earnest narratives of these supposed contactees left me feeling a little uneasy.  Part of it was a sense that if their stories aren't true, then these people are either lying or else are the victims of hallucinations that could qualify as psychotic breaks.  And although I am rather free about poking fun at people who generate strange ideas, I draw the line at including as targets people who have genuine mental illnesses.


My unease, however, had another source, and one that haunts me every time I see something like this; what if one of these stories is actually true?

A person who had been abducted, but was left with no physical trace of the experience, might well describe it in just these terms.  If the victim was someone who wasn't highly educated, there's no reason to expect that (s)he would remember the details, or explain them afterwards, in the way a trained scientist would.  The general vagueness and lack of clarity is, in fact, exactly what you'd expect if an ordinary person experienced something shockingly outside their worldview.

Now, please don't misunderstand me.  I'm not, in any sense, committing to a belief in alien abductions in general, much less to any specific one of the stories on Hirsch's website.  My hunch is that none of these stories is true, and that whatever these individuals is describing has another source than actual experience.  But it is only a hunch, and an honest skeptic would have to admit that there is no more evidence that these claims are false than there is that they are true.  My only point here is that if one of them was telling the truth, this is much the form I would expect it to take... which means that it behooves all of us, and especially the skeptics, not to discount odd claims without further investigation.  Skeptics tend to rail against the superstitious for jumping to supernatural explanations for completely natural phenomena; we should be equally careful not to jump to prosaic explanations when an odd one might be correct.

The best thing, of course, is to withhold judgment completely until the facts are in, but that is pretty solidly counter to human nature, and is probably unrealistic as a general approach.  And given the ephemeral nature of some of these claims, the facts may never come in at all.  All we can do is keep thinking, keep watching and listening and investigating... and not be afraid to push the envelope of our own understanding when the time comes.