Yesterday, we had an elderly gentleman in Spain who is building a spaceship to go to a planet that doesn't exist, and he should have known it doesn't exist because he's the one who made it up.  Today, we have: a woman in Ireland who married the ghost of a pirate, but now she's unhappy with him and wants a divorce.

The woman's name is Amanda Teague, and she lives in Drogheda, County Louth.  Teague gave up on romance -- at least the flesh-and-blood kind -- last year, and decided she might have better luck in the spirit world.  So she fell in love with the ghost of a Haitian pirate who was executed three hundred years ago, and married him this past January.

The pirate's name was Jack Sparrow.  Because of course it was.

"It is the perfect kind of relationship for me," Teague told reporters.  "There are a lot of people out there who don’t know about spiritual relationships, but it could be right for them --  I want to get the message out there."

In 2018 she wrote a book about her experience being married to a ghost.  It's called A Life You Will Remember, and is available on Amazon, where it has gotten two reviews, one five-star and one one-star.  The one-star one called it "bad fanfiction you can't put down."

She didn't just jump into the relationship without careful consideration.  "I told him I wasn’t really cool with having casual sex with a spirit and I wanted us to make a proper commitment to each other," she told reporters.  "I wanted the big traditional wedding with the white dress. It was very important to me."

So that's what they did. 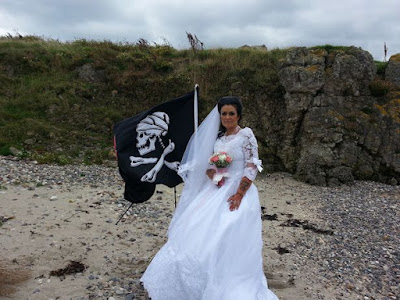 But less that a year later, the marriage was on the rocks.  The relationship wasn't successful, Teague-Sparrow says, and she wants to get a divorce.  "So I feel it’s time to let everyone know that my marriage is over," she said, in an interview in the Irish Post.  "I will explain all in due course but for now all I want to say is be VERY careful when dabbling in spirituality, it’s not something to mess with."

The article in the Irish Post seems to take Jack's side of things.  "The split is another blow for Jack," writes Gerard Donaghy, "after he was purportedly executed for thieving on the high seas in the 1700s."

You'd think he'd be over that by now, given that it happened three-hundred-odd years ago, although I'd expect being hanged is a trauma that would kind of stick with you.

What is unclear is how she'll get him to sign the divorce papers.  Or maybe they won't have to go through the official hassle, because the wedding was performed by a shaman in a boat off the coast of Ireland, so it's not certain what, if anything, Irish law would have to say about it.  Chances are they could go their separate ways and no one would blink an eye, since nobody seems to be able to see Jack except for Teague-Sparrow herself.

Anyhow, that's our dip in the deep end for today.  I wish her luck with being single again, and I hope Jack can find a nice location to haunt, perhaps accompanied by a lady ghost, since a relationship with a live human didn't work out so well.  So thanks to the loyal reader who sent me the link.  I didn't really need anything to lower my opinion of the human race further, but I know you meant well.