In the last couple of days we connoisseurs of all things extraterrestrial received some good news and some bad news.

One of the ways astronomers have suggested we might detect life on other planets is the presence of oxygen in the atmosphere, which could be detected spectroscopically.  Oxygen is highly reactive -- it is, unsurprisingly, a strong oxidizer -- meaning that it will tend to react chemically with whatever's around and get bound up into a compound of some sort.  Therefore, the logic went, if there's oxygen in the atmosphere, something must be releasing it faster than it's being removed by ordinary chemical reactions.

Ergo, a living thing (probably doing some variation on photosynthesis).

A piece of research published this week in Earth and Space Chemistry called, "Gas Phase Chemistry of Cool Exoplanet Atmospheres: Insight from Laboratory Simulations," written by a team of scientists from seven different research institutions, came to a startling conclusion -- that atmospheric oxygen might not be a signature of life but a result of photochemistry (chemical reactions triggered by sunlight).

What the researchers did was to expose various mixtures of gases thought to be common components of exoplanet atmospheres to a variety of temperatures (from 25 C to 370 C) and light intensities and spectra, and they found that in many conditions, the energy from the heat and light was sufficient to break down oxidized gases (such as carbon dioxide) and release molecular oxygen.

"People used to suggest that oxygen and organics being present together indicates life, but we produced them abiotically in multiple simulations," said Chao He of Johns Hopkins University's department of Earth and Planetary Science.  "This suggests that even the co-presence of commonly accepted biosignatures could be a false positive for life."

Now, this doesn't mean that if oxygen is found in an exoplanet's atmosphere, it is a false positive; it's just that the He et al. research shows that the finding would not be the slam-dunk astronomers thought it was.  Which is unfortunate.  Given that it's likely that most of the planets hosting life do not have life forms advanced enough to communicate across interstellar space, it'd be nice to have a way to find out they're out there without leaving Earth.  And one of the better possibilities for that has just been shown to be unreliable.

News from the Deep Carbon Observatory, a project that is the collective effort of over a thousand geologists, chemists, and biologists, is more encouraging.  Most of us have the idea that life is only possible on the thin skin of the Earth, and that if you go very deep into the Earth's crust conditions become quickly hot enough and pressurized enough that nothing could live.

The DCO released research last week showing that the amount of life in the "deep biosphere" might amount to as much as twenty billion tons, meaning it would outweigh all of humanity put together by a factor of twenty.  The DCO team drilled three miles deep into the seafloor, and investigated the deepest gold and diamond mines ever created, and everywhere they looked, they found life.

They found life flourishing at a temperature of 122 C -- twenty-two degrees above the boiling point of water.  They found it in pitch darkness, where there's nothing around to eat except for rocks.  They found it at crushing pressures in the deepest trenches in the ocean.

And, germane to the topic of today's post, it will broaden what conditions lie in the "Goldilocks Zone" -- the region surrounding a star where its planets would experience temperatures that are neither too warm nor too cold, but "just right."  Apparently "just right" has a broader range than we ever dreamed, which means that a great many more planets out there might host life than we ever expected.

However, it bears mention that the denizens of the deep biosphere are all simple.  Nothing much more complex than a nematode (roundworm) has been found down there.  So if you were hoping for running across the Morlocks, so far that's a no. 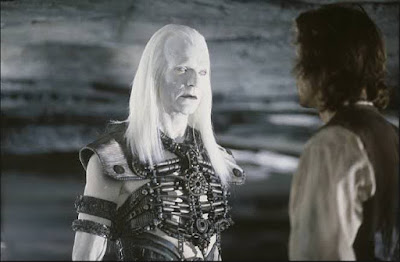 But it's a pretty exciting finding nonetheless, and supports a contention I've had for years -- that life is common in the universe.  Or, as Ellie Arroway put it in Contact, "If not, it'd be an awful waste of space."  Now it's on the chemists and atmospheric scientists to find us a better way to tell that it's there, since the oxygen idea just got shot down.

We'll see what they come up with.  Because I'm certain that it's only a matter of time before we prove beyond any doubt that we're not alone in the universe.