What is the fascination creationists have for the produce aisle?

First we had Ray Comfort claiming that bananas were "the atheists' worst nightmare" because we for some reason were supposedly befuddled by the fact that bananas are "perfectly shaped to fit into the human hand" and had a "non-slip surface," so they must have been created that way by an intelligent deity.  After Comfort was subjected to ridicule on social media at a level that would induce most of us to change our names and have our faces surgically altered before being willing to go out into public again -- I'll leave it to your imagination as to what other objects people informed Comfort were "perfectly shaped to fit into the human hand" -- you'd think the creationists would say, "Okay, maybe that's not the best argument we have."

But no.  Creationists, as a whole, seem to think that if at first you fail miserably, you don't just try try again, you beat the idea unto death with a blunt instrument.  And no one is better at that strategy than Kent Hovind, who is famous not only for specious arguments for young-Earth creationism but for spending ten years in federal prison for tax evasion.

Hovind seems to think that the way to support Ray Comfort's argument is to find other fruits and vegetables that are "the atheists' worst nightmare."  First, we had lettuce:


How could lettuce evolve slowly by chance and from what?  How many trillions of intermediate steps would there have to be to go from a dot of nothing to a living lettuce plant?  Is there any scientific evidence besides lines on paper?

Yes, there is.  Thanks for asking.


Then there were grapes:

How could a grapevine… evolve slowly by chance and from what?  Wait till you see what they teach on the internet that the grapes evolve from.  You won’t believe it…

How could it happen by chance and from what?  How many trillions of intermediate steps would there have to be to turn a dot of nothing into a grape?  Isn’t that what they teach?

Because that was such a wildly successful line of reasoning, Hovind turned to celery:


How could celery have evolved slowly by chance, and from what?…  I would like some hard scientific evidence.  What is the ancestor of celery if it wasn’t celery?  What was it?  And if it was something other than celery, please tell me how it changed.

How many trillions of intermediate steps would there have to be to go from an amoeba to celery?  I would say it would take a lot.  I would like to see what’s the evidence is for that…

That is going to be problematic, because celery didn't evolve from amoebas.  But once again, thanks for asking.

So what about... broccoli?


Broccoli.  How could broccoli have evolved slowly by chance?  I would like an answer to that.  A very simple answer.  How many trillions of intermediate steps would there have to be to change from an amoeba... to broccoli?  Is there any scientific evidence for these supposed changes that you guys believe in — capital B, believe?

Evolution is a religion.  Is it more logical to believe that maybe broccoli was created by a really smart Creator?

Hovind seems to like amoebas almost as much as fruits and vegetables.  Maybe he doesn't know about any other life forms, so that's why he keeps coming back to those.

To wit, last week's installment, wherein we hear about oranges.  And you'll never guess what his argument is:

You think all those oranges, and those trees that are producing it, and the dirt that’s holding it all came from a dot of nothing that exploded 13.7 billion years ago?  Whodathunkit.  That’s a new word I made up.

How many trillions of intermediate steps would there have to be to go from a dot of nothing to an orange tree, and where is the evidence?  Is there any scientific evidence for all these supposed changes you guys talk about?…  Could it be more logical to believe, maybe, the orange tree was created by a really smart Creator?…  That’s the most logical conclusion.

Of course, what all this boils down to is the argument from ignorance; "I can't imagine how this could happen" = "this didn't happen."  Evolutionary biologists and geneticists have a very good idea about how all of these organisms evolved (in most of these examples, with significant help from artificial selection by humans), and Hovind is only claiming this because he hasn't bothered to read any of the scientific papers explaining in great detail the answers to all of these questions. 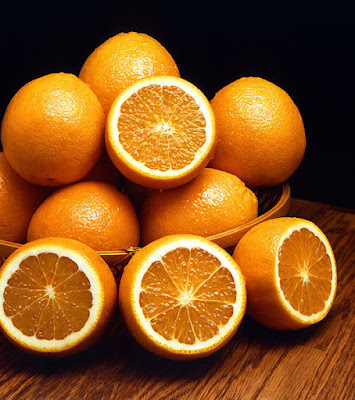 And I swear, if I hear one more time that the Big Bang Model says that "a dot of nothing exploded and made everything," I'm going to punch a wall.  For fuck's sake, if you're going to blather on about something, at least read the Wikipedia article first, if more technical treatments are above your head.  If you can't be bothered to do at least that much, allow me to direct you to the definition of "straw man argument."

Oh, and Kent?  You did not make up "whodathunkit."  I can remember my dad saying that back in the mid-1970s when I was in high school.  But given your determination to misrepresent and play fast and loose with scientific claims (not to mention your IRS return), I don't suppose there's any reason to expect you'd be more honest about other stuff.

But you have to wonder where he's going to go now.  Artichokes?  Mangoes?  Okra?  Pomegranates?  Bok choi?  The possibilities are endless.  It'd be nice, though, if he could change the rest of the argument, because it's getting tiresome to read, "So, consider _____.  Could that have come from a dot of nothing 13.7 billion years ago?  What's the evidence?" etc. etc. etc.  He's rung the changes on this one enough, don't you think?