When educational budgets are cut -- which they are, every year -- inevitably what is hit the hardest are programs for the arts, music, theater, and other electives.

This is ridiculous, and I say that as someone who is in his 32nd year of teaching science, a so-called "core" subject.  And I don't mean to criticize the importance of having a good "core" education; we all need to be able to read and write, do mathematics, understand the history of humanity, and have a basic and broad grasp of scientific principles.

But that's not the be-all-end-all of education, or at least it shouldn't be.  I mean, consider not what gets you a job, what allows you to do mundane chores like balancing your checkbook, but what actually brings joy to your life.  What are your hobbies, things you spend your spare time doing, things you'd spend much more time doing if you had the leisure?  My guess is very few of us fill our free time doing chemistry experiments, even admitted science nerds like me.  No, we paint, sculpt, garden, play an instrument, sing in the choir, play or watch sports (or both), cook elaborate meals, write stories.  And while those do take a basic 3-Rs education -- I wouldn't be much of a fiction writer if I had a lousy vocabulary or didn't know how to write grammatically -- for many of us, our real fascinations were discovered in the classes that go under throwaway names like "electives" and "specials" and "optional courses."

So cutting these subjects is, for many students, taking away the one thing about school that makes it tolerable, and robbing them of the opportunity to find hidden talents and undiscovered passions that will bring them joy for a lifetime.

But a recent study has shown that it's more than that.  Research by Katherine Sledge Moore and Pinar Gupse Oguz of Arcadia University, and Jim Meyer of Elmhurst College, has found that music education correlates strongly with the development of flexible intelligence -- and that those gains translate across disciplines. 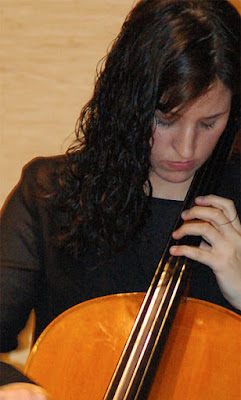 [Image licensed under the Creative Commons Jacob Garcia from Reus, Spain, The Cello Player, CC BY 2.0]

In "Superior Fluid Cognition in Trained Musicians," published two weeks ago in Psychology of Music, the researchers found that the degree of experience a person has in playing music (or singing), the higher they score on a variety of metrics -- episodic memory, working memory, attention, executive function, and processing speed.

It's hardly surprising when you think about it.  As the researchers put it, fluid intelligence skills "are highlighted in musical training," which involves "quickly comprehending a complex symbolic system, multitasking, reasoning, and more."  I can say from personal experience that performing music -- not just playing it at home for your own entertainment -- takes those skills up an additional notch.  I have been a performing musician for years.  (If you're curious, I play flute in a Celtic dance band called Crooked Sixpence.)  Being up on stage requires that you think on your feet, and often make lightning-fast alterations to what you're doing.  As an example, most of what my band plays are medleys of three or four tunes, and we almost never plan ahead how many times we're going to play any one of them (nor who'll be playing melody and who'll be playing harmony).  Our fiddler, who is more-or-less in charge of the band, just gives me a wiggle of the eyebrow if she wants me to take a solo, and says "hep!" if we're switching tunes.  Sometimes the inevitable happens -- the fiddler and I will both jump to harmony at the same time, or something -- but almost always, one of us will recognize it in under two seconds and slip right back into playing melody.  Despite the complexity of what we do, the times we have a real crash-and-burn on stage are very few and far between.

So this study is spot-on.  And its conclusions are further evidence that we should be expanding arts and electives programs, not cutting them.

Not, honestly, that I expect it will have an effect.  Sorry to end on a pessimistic note, but the educational establishment has a long track record of completely ignoring research on developmental psychology in favor of "we've always done it this way."  The most egregious example is our determination to start foreign language instruction in 7th or 8th grade, when we've known for years that our brain's plasticity with respect to learning new languages peaks around age three or four, and declines steadily thereafter.

Or, as one of my students put it, "So we start teaching kids languages at the point they start to suck at it."

A close second is that researchers have been saying for years -- with piles of evidence to support them -- that children need recess or some other unstructured play time in order to improve overall behavior and attitudes about being in school.  Not only that, but recess time correlates with better scores on tests, so like music, it's an investment that pays off across the board.  Nevertheless, schools across the country have been gradually reducing unstructured leisure time, in some places to twenty minutes or less per week, in favor of devoting more time to preparing for standardized tests.

Now there's a way to make kids look forward to going to school in the morning.

I'd like to think that this new research will influence educational establishments and (especially) budgetary decisions, but I'm not holding my breath.  Any change on that count is likely to be very slow to come.  But still, every piece of evidence counts.  And anything we can do to foster the development of fluid intelligence, positive attitudes, and confidence in children is movement in the right direction.