I'm always fascinated by a good mystery, and that's definitely the appropriate category for an artifact called the Phaistos Disk.

Found in the Minoan palace of Phaistos, on the island of Crete, in 1908, the Phaistos Disk is fifteen centimeters in diameter, made of fired ceramic clay, and (most interestingly) has an inscription on it.  Here's a photograph: 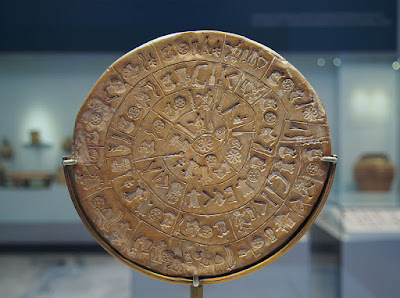 The Disk is thought to have been made in the second millennium B.C.E., making it approximately contemporaneous with the Linear B script of Crete, which was successfully deciphered in the early 1950s by Alice Kober, Michael Ventris, and John Chadwick.  This accomplishment was the first time that anyone had cracked a script where not only was the sound/letter correspondence unknown, but it wasn't even known what language the script was representing.  (As it turned out, it was an early form of Mycenaean Greek.  Earlier guesses were that it represented Etruscan, a proto-Celtic language, or even Egyptian.  The script itself was mostly syllabic, with one symbol representing a syllable rather than a single sound, and a few ideograms thrown in just to make it more difficult.)

The problem is, the Phaistos Disk is not Linear B.  Nor is it Linear A, an earlier script which remains undeciphered despite linguists' best attempts at decoding it.  The difficulty here is that the Phaistos Disk has only 242 different symbols, which is not enough to facilitate translation.  Once again, we're not sure what the language is, although it's a good guess that it's some form of Greek (other linguists have suggested it might be Hittite or Luwian, both languages spoken in ancient Anatolia (now Turkey), and which had their own alphabet that bears some superficial similarities to the symbols on the Disk).

This lack of information has led to wild speculation.  Various people have claimed it's a prayer, a calendar, a story, a board game, and a geometric theorem, although how the hell you'd know any of that when you can't even begin to read the inscription is beyond me.  But it only gets weirder from there.  Friedhelm Will and Axel Hausmann back in 2002 said that the Disk "comes from the ruins of Atlantis."   Others have suggested it's of extraterrestrial origin.  (Admit it, you knew the aliens were going to show up here somehow.)

Others, more prosaically, think it's a fake.  In 2008 archaeologist Jerome Eisenberg proclaimed the Disk a modern hoax, most likely perpetrated by Luigi Pernier, the Italian archaeologist who claimed to have discovered it.  Eisenberg cites a number of pieces of evidence -- differences in the firing and in how the edges were cut, as compared to other ceramic artifacts from the same period; the fact that it's incredibly well-preserved considering how old it supposedly is; and vague similarities to Linear A and Linear B characters, with various odd ones thrown in (Eisenberg says the symbols were chosen to be "credible but untranslatable" and selected "cleverly... to purposely confuse the scholarly world."

Of course, this didn't settle the controversy.  Archaeologist Pavol Hnila cites four different artifacts, all discovered after the Disk, that have similar characters to the ones on the Disk, and that there is not enough evidence to warrant accusing Pernier and his team of something as serious as a deliberate hoax.

So the mystery endures, as mysteries are wont to do.  I find this fascinating but more than a little frustrating -- to know that there is an answer, but to accept that we may never find out what it is.  That's the way it goes, though.  If you're a true skeptic, you have to be willing to remain in ignorance, indefinitely if need be, if there is insufficient evidence to decide one way or the other.  This leaves the Phaistos Disk in the category of "Wouldn't this be fun to figure out?" -- a designation that is as common in science as it is exasperating.