Racing against your brain

Being a devoted (if not especially fast) runner, and also ridiculously competitive, I'm always interested in ways to increase my speed and endurance.

It's not, honestly, that I am under any illusion of my becoming a world-class marathoner, or anything.  I'm 58 years old, and don't think there's any way I'd ever have the determination to train intensely enough to be a contender for first place.  But I'd like to see some improvement -- specifically, more improvement than I've seen over the past two years, when I've been stuck averaging around a ten-minute mile while younger and more athletic guys are clocking in with seven-minute miles or better.

Yesterday I found out that some of my problem is probably in my brain, not in my legs.

A study published last week in Nature: Human Behavior called, "Learning One's Genetic Risk Changes Physiology Independent of Actual Genetic Risk," by psychologists Bradley P. Turnwald, J. Parker Goyer, Danielle Z. Boles, Amy Silder, Scott L. Delp, and Alia J. Crum of Stanford University, suggests something astonishing; your performance in a race is more dependent on whether you think you have a variant of a gene that improves stamina than whether you actually have the gene. 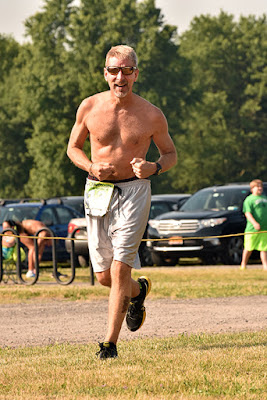 Me at the end of a race in Montezuma, New York last year.  It was 95 F and about eight krillion percent humidity, and I definitely was not thinking, "I have excellent endurance and stamina."  My mindset was more, "I hope I can make it across the finish line before I die so at least I won't block the trail for the other runners."


The most amazing thing to me is the carbon dioxide part.  The rest of it I can attribute to attitude -- if I think I'm going to crap out more quickly because of some factor beyond my control, I'm likely to interpret all the stuff runners have to put up with -- the little aches and pains, shortness of breath, sweating, and heart pounding -- as evidence that I'm not going to be competitive no matter what I do.  It's easy to see someone paying unwarranted attention to what happens to all of us when we run, and giving up more quickly, if they figure that it's just their unfortunate genetic makeup causing it.

But the carbon dioxide part is fascinating, because that's not something under any sort of voluntary control.  It's hard to see how you could affect the rate at which carbon dioxide is cleared from the blood by some kind of power-of-positive-thinking phenomenon.  But that seems to be what happened.  "What people haven’t fully appreciated is that that information also puts you into a mindset: 'I’m at high risk or I'm protected,'" study co-author Alia Crum said.  "And that alone can have potent effects on physiology and motivation."

Of course, what I want to know is how.  How could simply thinking that you have good endurance change your physiology drastically enough to result in a measurable increase in speed and stamina?

And more to the point, how can I tap into that?

I've always been pretty dubious about the results of positive self-talk.  I mean, it's probably better than negative self-talk, but I've always thought it was only from the standpoint of making you a generally happier person.  (Not that this is inconsequential, mind you.)  But apparently athleticism has as much to do with mindset as it does with genes, and when elite athletes say that the only way to succeed is to believe you can, there might be something scientific to it after all.

But for me, it falls into the "Now that I know this, what do I do?" department.  I suppose I could try convincing myself that I'm fast and powerful and all the rest, but I have this sneaking suspicion my brain would be saying at the same time, "C'mon, you know that's not true," which would probably spoil the effect.  Or maybe I could have a genetic test for CREB-1 and have my wife lie to me about the results if it turns out I have the low-endurance variant.

Whatever I do, it's probably more important simply to keep training.  But maybe cursing myself when those young bucks zoom past me isn't the best approach -- maybe I should be thinking, "Next time, that'll be me."