The ECREE principle and the lost polar pyramids

I'm often asked why I am so confident in my disbelief of all of the ideas I lump together as "woo-woo" -- ghosts, psychics, Bigfoot, UFOs, conspiracy theories, crystals, homeopathy, and so on.

That question contains two misleading words: "confident" and "disbelief."  As I've mentioned before, in the absence of evidence either way, I'm anything but confident.  If there is no particular scientific reason that something is impossible -- for example, as in the case of Bigfoot -- I am perfectly willing to sit there not knowing whether it's real, forever if need be.  I might doubt a particular sighting of Bigfoot, based upon the circumstances, but I am in no way saying the the whole phenomenon is impossible.  As a scientist, any level of confidence in the complete absence of evidence is an absurd stance.   I neither believe nor disbelieve in Bigfoot; it is, at this point, a possible, but unproven, assertion, and I am content to leave it that way indefinitely until such time as hard evidence is uncovered.

On the other hand, there are cases in which I lean toward disbelief because the claim is so outrageous (although again, perhaps not scientifically impossible) that my sense is that the burden of proof is on the person making the claim, not on me to disprove it.  Here, the ECREE Principle comes into play -- Carl Sagan's dictum that Extraordinary Claims Require Extraordinary Evidence.  Yes, I know this isn't some kind of scientific law, it's only a rule of thumb, but taken as such, it works pretty damn well, keeping us from demanding the same level of evidence for every claim regardless of its plausibility.

Which brings us to the Lost Polar Pyramids.

Any time I hear someone mention the word "pyramid," my skepti-senses are automatically activated, because so much patent nonsense has been claimed about them.   You have your Pyramids-As-Energy-Collectors crew, not to mention your Egyptian-Pyramids-Were-Built-By-Aliens crew and your Curse-Of-The-Pyramids crew, all vying for the craziest phenomenon to attribute to what honestly are just piles of rocks, albeit very impressive ones.   And now, we have the claim that human-constructed pyramids have been discovered in Alaska and Antarctica.

If you read the articles in question, you'll find that mostly what the writers do is to show you some photographs and say, "Wow!  Isn't this weird!  Pyramids in the polar regions!  They have to be artificial constructs."  In the case of the Alaska article, we have testimony from a retired intelligence officer named Douglas Mutschler that he and others detected an "underground pyramid" while monitoring the seismic waves from a Chinese nuclear detonation.  The author supports this claim with an aerial shot showing something with a vaguely squarish contour that is so hard to see that in the article, you have to be told where in the photograph to look.  In the Antarctic article, all we're given is some photographs with pointy-topped rocky structures, and we're told they're manmade pyramids.

(Let's for the moment ignore the fact that the Alaska article also goes into something the author refers to, with unintentional comic effect, as the "Alaska Bermuda Triangle," a region bounded by Juneau, Anchorage, and Barrow where allegedly planes tend to disappear.  This is a whole different argument, involving a whole different set of assumptions and implausibilities -- so we'll concentrate for the time being simply on the "human-constructed pyramids in the polar regions" claim.) 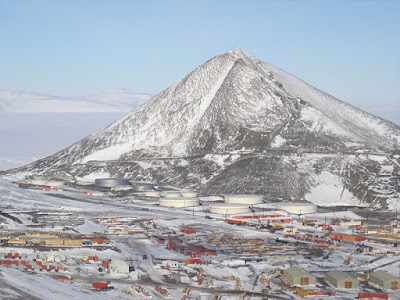 So, back to the ECREE principle.  Is the idea of a set of manmade pyramids in Alaska and the Antarctic an "extraordinary claim?"  Given the small population of Alaska, and the absence of an archaeological record of large-scale building there, not to mention the nonexistence of a human population in Antarctica until the mid-20th century, I'd say we have here a pretty outlandish idea.  Is it impossible?  Maybe not.  But a fuzzy aerial shot, the twenty-year-old testimonial of one man, and some random pictures of pointy mountaintops are just not sufficient grounds for accepting that there's something weird going on.  As I've pointed out before, there are many examples of purely natural geological formations that have straight lines, right angles, polygonal cross-sections, and so on.  If you want me to believe that what I'm looking at is some mysterious artifact of a mysterious culture, built in an entirely unexpected place, what we currently have has not met any sort of minimum standard for evidence.   You'd better head on back to your alleged pyramids and bring us back something better if you want the scientific world to sit up and take notice.

But of course, in the case of the Antarctic pyramids, there's a good reason that we might not want to know if they exist, because you H. P. Lovecraft fans probably recall what happened when scientists found an ancient city in Antarctica in "At the Mountains of Madness."  Of the two people who survived, one ended up in an insane asylum because of the horrors he'd seen.  The rest of the team variously got dissected, had their heads bashed in, or got eaten by Shoggoths.  And heaven knows, we wouldn't want that to happen.

In any case, what we have here is an excellent example of why I find most woo-woo claims lacking.   It is not, as I mentioned, because I don't think that there are weird things in the world; it's that if you bring a weird thing to my attention, you'd better have a pretty convincing argument to back you up.   Otherwise, like our Alaskan and Antarctic pyramid hunters, your story will just get filed in the folder labeled "Maybe, But I Doubt It."