I understand that wild, spooky, improbable explanations are more interesting than prosaic, ordinary ones, but really, people.

This comes up because of a video that hit YouTube a couple of days ago that alleges to show a toddler teleporting into existence.  With no further ado, here's the clip:


So after watching this, what do you think is more likely?


(1) the editor of the video cut out a piece of the footage, making it look like a kid appeared out of nowhere.


(2) Your favorite of the following:

(a) It's a glitch in the Matrix, showing that we're all in an elaborate computer simulation, which works down to the last detail except for occasionally allowing small children to pop into or out of existence.
(b) The child is an alien who did the "energize, Scotty" thing and appeared on a street in Tewkesbury just in time to get caught in a television interview.
(c) The child is from the future.  Why (s)he came back here is a matter of conjecture, but some have suggested that (s)he is here to intervene and save the United Kingdom from Brexit.
(d) Blah blah blah lizard people blah blah Illuminati blah blah New World Order.

My pointing this out is probably a losing battle, however.  The subreddit r/Glitch_in_the_Matrix has, at present, 305,000 subscribers, and it's unwarrantedly optimistic to think that all of them are there just for the shits and giggles.  And there's got to be at least that many subscribers on subreddits and other websites about the Illuminati and New World Order, but I'm not going to go to said websites and find out, because They Are Always Watching and then They will know I'm checking them out and get suspicious and send the Men in Black to take me out and I'll never be heard from again.

You know how it is. 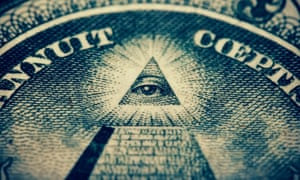 So this is yet another example of grabbing confirmation bias with both hands and running off the cliff with it, and I can say with some certainty that it makes a lousy parachute.  The bottom line is that most everything has a perfectly simple, rational explanation, and there is really no reason to seek out one that demands the existence of Matrices or aliens or time travel or lizard people.

Although Stephen Miller's most recent attempt at simulating a human being by applying paint-on hair does make me wonder about the lizard people.