What the hell is going on in Illinois?

Recently there have been no fewer than five separate reports of bizarre goings-on involving winged cryptids, all but one of which was sighted near Rockford.  My first thought was to wonder if Illinois had gotten the jump on Oregon and legalized psychedelic mushrooms first, but apparently this is not the case.

The first, as reported over at Phantoms and Monsters, was of a pterosaur along the Vermilion River near Danville.  Here's how the incident is described:


As he stood on the bluff looking out onto the river, he noticed a large shadowy figure gliding downstream towards him.  As it got closer, the bizarre creature became more defined.  He observed, what he described, a 'pterodactyl' gliding about 4-5 feet above the surface of the river.  DF [the eyewitness] estimated that the wingspan was approximately 25 feet, as it covered half the width of the river.  The huge flying being looked exactly like the images of the prehistoric flying dinosaur.  Long beak with a long ray on the head.  Dark gray leathery-skinned body and wings, with a long tail that flattened on the end.  It made little sound, but cast a shadow on the river as it flew just below the height of the bluff.  The water swirled as it glided past.  The beast continued gliding downstream until DF lost sight of it.  He stated that it never flapped its wings.  DF's first reaction was to get back to his house and tell his wife what he had seen.

What puzzles me here, as in many of these cases, is why he didn't think to try to take a photograph.  Almost everyone has his/her cellphone at all times; if I'd seen a supposedly-extinct creature fly past, and kept it in view long enough to watch it "gliding downstream," I'd have gotten as many photographs of it as I could.

But maybe he was so shocked that he didn't think of it till afterwards.  Or maybe he's one of the 1% who isn't constantly accompanied by a cellphone. 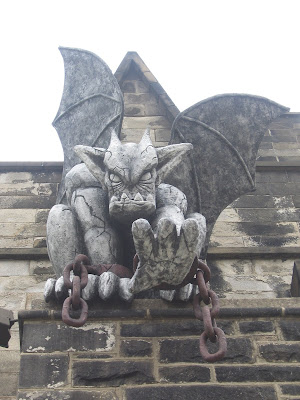 Then there's the person near Rockford who saw a "black winged humanoid" while standing on her deck one evening:


I was stargazing as I often do, when I was startled by the sudden furious barking of a neighbors [sic] dogs.  As I turned and looked towards the direction of the barking it was at that moment I saw an all black 7ft in length man with huge bat-like wings flying across the park that borders along my backyard.  It then descended to approximately 5 to 6 ft above ground.  It pulled or folded its wings in slightly and then glided along the paved path that runs through the park.  It continued gliding through an easement between two houses disappearing from my sight.

Afterwards, she heard a terrifying screeching noise coming from the woods in the direction the thing had gone.  The next day, a neighbor showed her that one of the posts of his chain-link fence had been bent at a 45-degree angle, and the woman mentioned seeing the flying humanoid thing.  A kid who overheard them laughed and said all she'd seen was a heron fly overhead, and she said, "A heron can't bend a fence post," which is true, but as a logical chain of reasoning, I don't think it really amounts to much.  Despite this, she says the only possible conclusion is that she saw...

Also near Rockford, we have an account from a woman who says she saw a humanoid walking, then suddenly taking flight:


The eyewitness 'KJ' states it was approximately 6am and that she was on the outside porch.  All of a sudden she observed a human-like being walking in the yard of a house on the corner of Bruce St. and Woodlawn Ave. in Rockford, IL. (about 1 block away).  The being suddenly produced a large set of wings and took flight, gliding over the back gate of the property.  It then disappeared into the trees and foliage on the next block.  There was enough morning light available for an excellent observation...  She described the being as tall and dark, almost black.  The wingspan was very broad.

The third sighting -- also near Rockford -- was of a creature that cryptid aficionados have christened, I shit you not, "Deerbat:"


I'm not sure how to describe this but what we saw was frightening.  The corn parts about 8 feet in front of my car, Idk if you have ever seen a deer jump out of corn but its like a horse hop.  This thing was the size of big buck but was completely black.  Mind you my headlights are focused right at the stretch of road and corn area, so the whole scene was well illuminated.  As it proceeded to jump out of the corn it opened these huge set of wings and remained airborne.  It flew right in front of my car and did this zig zag flight pattern incredible fast.  Almost like a fly or bug would do.  After the quick zig zags it shot straight up in to the air.  I mean shot like out was placed in a canon [sic] and blasted in the sky.

Then there's the old lady in Rockford who was shooting the breeze with a friend on her front porch, when they saw a gargoyle:


During a conversation, the friend stopped talking and began to stare across the street.  SS [the eyewitness] looked in the same direction, and noticed a dark gray winged humanoid slowly flying near a large tree.  SS stated that it seemed like the being 'was in slow motion' as it glided toward the tree.  The friend said 'do you see that?'  The witnesses were close enough to notice that it had small cat-like ears and intense red eyes.  There were no other facial features visible.  It was quite muscular throughout the body and had 2 defined legs, and had arms that attached to the wings.

She stated that the winged humanoid was 7ft in length with a wide wing span.  The wings were like those of a bat with a leather-like membrane.  Apparently the being perched in the tree, but again took flight.  This is when SS's husband took notice.  The winged being was gliding towards a pair of large pine trees, as it's [sic] legs were 'kicking up and down' while in flight.

The being flew between the 2 pine trees, and then suddenly 'vanished.'  SS said 'gargoyle,' and her friend acknowledged 'yes, a gargoyle.'

This brings me to an awkward question, which is: how could a seven-foot-tall, highly muscular humanoid, fly?  Flying requires a tremendous amount of exertion per unit mass, which is why most flying animals are small, or at least very lightweight for their size.  A physicist over at Yale did some analysis and found that an adult male human would have to have a wingspan of 6.7 meters (21 feet) just to get off the ground, and he admitted that this wasn't even taking into account the extra mass that the wings themselves would contribute.

Which, honestly, I find rather disappointing, as I've always wanted to have wings.  Big feathery wings coming up from my shoulders.  It'd make putting on a shirt difficult, but given that I have a penchant for running around half naked when the weather's warm anyhow, I'm willing to make that sacrifice.

But alas, no.  Having to port around 6.7-meter-long wings would be too much of an inconvenience, however fun flying looks.

So I'm a little dubious about all of these beastly goings-on in northern Illinois, and am inclined to agree with the scoffing teenager who thought people were seeing herons.  At close range, herons do have a pterodactyl-like-look, and in dim light, the brain can play some serious tricks on you.

But anyhow, if any of my loyal readers live in Illinois, I'd advise you to keep your eyes peeled and your cellphone camera apps at the ready.  Because if there are any more weird sightings of flying humanoids, I want to see photographs.