If you think you've got problems, at least you're not trying to get rid of a huge Arizona ranch at a $1.5 million loss because you're sick and tired of being attacked by aliens.

At least that's the claim of John Edmonds, whose land in Buckeye, Arizona, about an hour and a half from Phoenix, has (he says) been the site of a huge amount of extraterrestrial activity.  He and his wife foiled an attempted kidnapping, and over the twenty years they've been there, he's killed eighteen "Grays."

With a samurai sword.

I'm torn between thinking this is idiotic and completely badass.  I mean, if I knew I was under siege by hostile aliens, I'd probably arm myself with more than a sword.  Especially if I lived in Arizona, where everyone over the age of two is packing heat.  And you'd also think the aliens would be armed, wouldn't you?  Laser pistols are a lot more accurate, long-range, than samurai swords, unless you're a Stormtrooper, in which case it probably doesn't matter either way. 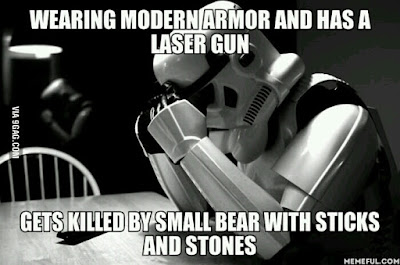 What's oddest about the samurai sword thing is that the guy says he owns an AK-47, which he used to defend his family when the aliens tried to abduct his wife.  She barely escaped -- "it came down like a cone of light," Edmonds says, "and she began to rise up in to the cone...  So I grabbed my AK-47 with a double banana clip in it, went outside, and opened up."  So apparently if your spouse is being levitated into the air by a tractor beam, the solution is to fire a gun in some random direction.

So why he doesn't use the AK-47 to defend himself against the aliens rather than a sword, I don't know.  You may also be wondering why, if he's killed all those aliens, where the bodies are.  I know I was.  If I killed an alien (in self-defense, of course; in the interest of interstellar amity, if they Come In Peace, I'm more than happy to have them here), I'd definitely keep the body as evidence that I wasn't just a raving loon.  Edmonds says that the bodies vanish, which sounds awfully convenient.  He does have a photo in the video showing what he claims is alien blood from one of his kills, which makes me wonder why if the bodies disappear, the blood doesn't as well.

One of those extraterrestrial biological mysteries, I guess.  But Edmonds goes on to say that you have to "cut off the head, and disconnect the antennae, or they instantly 'phone home' -- even with a razor-sharp sword, it's nearly impossible to decapitate them in one swing."

As far as why the aliens are targeting him, he says it's because his ranch is so large that it gives the aliens room to "open up portals... that are large enough for triangular crafts, wings, or orb-like shapes to pass through."

"These objects leave the space around the ranch, and other objects pass through the portals in the other direction," Edmonds adds.

Despite his success at fighting off the invaders, Edmonds hasn't come away unscathed.  He says the Grays gave him scars (which you can see on the video I linked above), not to mention "symptoms like radiation poisoning."  More troubling, though, is his claim that the previous owners "simply disappeared -- all their stuff was still in the house, leading to speculation that they were in fact abducted by extraterrestrials."  So I guess it's understandable that he's fed up, although it does bring up the question of who sold him the ranch.  He and his wife are selling, and are asking five million dollars for it -- a million and a half less than what he says it's valued at.

If I had the money, I'd definitely buy it.  For one thing, I love Arizona and have always wanted to live in the desert.  Especially now, when we're sitting here in upstate New York in the middle of the "polar vortex," and the current wind chill is -25 F.  For another, I would love to have first-hand evidence of extraterrestrial life.  I'd appreciate it if they wouldn't abduct my wife, though, because I kind of am attached to her, you know?

But hey, if they Come In Peace, they're welcome.  I wouldn't even object if they wanted to take over the government.  Couldn't be worse than what we currently have.