There's a pair of stories that to my eyes don't seem to have much to do with one another, but which put together are inducing multiple orgasms in the conspiracy theory crowd.

First, we have reports of a series of booming noises that have been heard in three locations in eastern North America in the last few weeks.  The first one, which occurred late in December, found residents of Scranton, Pennsylvania being jolted out of bed by noises "like fighter jets flying overhead."  The noises continued off and on for about an hour.  Spokespeople for the Lackawanna Energy Center, a gas-powered electrical plant near Scranton, were quick to claim responsibility, saying it was a steam release from an emergency pressure valve, and that it generated "the loudest noise we've ever heard" but was not an indication of anything malfunctioning, nor was it a cause for safety concerns.

Two weeks later, residents on Davis Island, near Tampa, Florida, were awakened at four AM by the same sort of noises.  The cause, apparently, was...

... steam venting from an emergency pressure valve, this time at the TECO Bayside Power Station.  Nothing to be concerned about, officials said, sorry for waking y'all up.

Then, just a few days ago, the town of Salisbury, North Carolina experienced much the same thing, with a sound like a combination of "a locomotive and a space shuttle taking off."  Dogs and coyotes went nuts barking, and -- thus far -- no local power plants or other agencies have admitted responsibility for the uproar.

So this already had conspiracy theorists raising their eyebrows in a meaningful manner and saying, "this can't be a coincidence."  Which, of course, is exactly what you call it when events coincide, but we can overlook the semantics for the time being.  Because said conspiracy theorists started jumping up and down, making excited little squeaking noises, when another series of stories started making the rounds, once again from three different locations.

This series of odd occurrences weren't anomalous noises, but anomalous radar traces.  First, in early December, National Weather Service meteorological radars picked up a strong signal from a broad area in Illinois, Kentucky, and Indiana, which looked like a massive thunderstorm -- on a completely clear night.  Two days later, similar (but smaller) oddball signals were recorded on weather radar stations in Maine and Florida.

Brett Tingley, over at Mysterious Universe, said the most reasonable explanation is that it was chaff -- particulate aluminum that is released by military aircraft when they want to confuse enemy radar.  The difficulty with this hypothesis is that from the radar traces, it was released at a greater height (10,000 feet) than is typical for chaff tests.  Also, the chaff cloud (if that's what it was) held together for ten hours, far longer than usual, and no one has reported any trace of the stuff on the ground.

Of course, the military is neither confirming nor denying these reports.  Which is fuel to the fire for the aforementioned conspiracy theorists.

So these stories were bad enough independently, but when people started putting them together, in the fashion of a kid adding two and two and getting twenty-two, things got out of hand.  All of this stuff cannot be a coincidence.  It's got to Mean Something.  What exactly it's supposed to Mean is not all that clear, but here are a few explanations I've seen, if I can dignify them by that name: 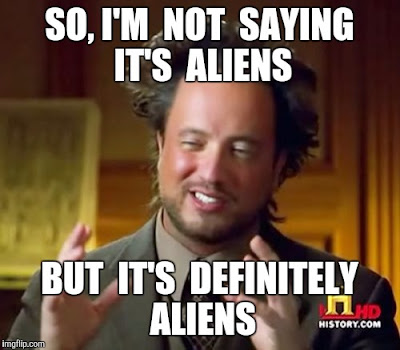 My hunch is that none of these things have any connection.  Power plants make loud noises sometimes, and it doesn't mean they're about to blow up, or any of the other panicked ideas I've heard.  Radar anomalies also occur, sometimes because of meteorological events, sometimes from natural or man-made causes (the first recorded radar glitch occurred back during World War II, when technicians monitoring the skies for aerial invasions from Germany freaked out over what turned out to be a flock of migrating birds).

So anyhow, I'm not ready to ascribe all this to nefarious causes, much less link together the loud noises with the radar glitches.  I mean, if they are connected, why did they happen so far apart?  The only state that had both was Florida, and they didn't happen at the same time.  Otherwise, we have Illinois, Kentucky, Indiana, and Maine on the one hand, and Pennsylvania and North Carolina on the other.

Pretty uncoordinated aliens, seems to me.

Of course, I'm saying all this without much in the way of actual information over what was reported by eyewitnesses, so maybe I'm wrong.  Maybe this is a sign of the American military trying to destroy civilization, or an alien invasion, or the End Times, or whatnot.  I'm not going to lose any sleep over it.  I figure if it turns out to be the end of the world as we know it, I'll find out eventually.