In case you had run short of things to be outraged about, today we have a story that the Trump administration is trying to push a legal definition of sex as "a biological, immutable condition determined by genitalia at birth."

To a biologist, this is a little like the government passing a law defining pi is being "exactly equal to three."  You might not like the fact that pi is an irrational number, it might be annoying to have to use a decimal approximation to calculate the circumference of a circle, but all of that falls clearly into the "tough shit" department.  The universe is not arranged so as to make you feel comfortable, and if you can't handle that, well, that's too freakin' bad.

Of course, it's no big mystery why they're doing this.  The evangelical Christians, who have had a stranglehold over the Republican Party for years, have a remarkable capacity to look past all sorts of biblical injunctions such as the prohibition against infidelity, divorce, and usury (lending money at interest), not to mention more perplexing ones like the rules against eating shellfish and wearing clothes made of two different kinds of cloth sewn together.  On the other hand, anything remotely approaching sexual relations between two consenting adults other than a traditional, in-marriage male/female relationship, makes these people go into a complete meltdown.  (Other than the aforementioned infidelity, which apparently is okay, especially if it was Donald Trump engaging in it.)

I swear, these people are more concerned about what I do with my dick than I am. 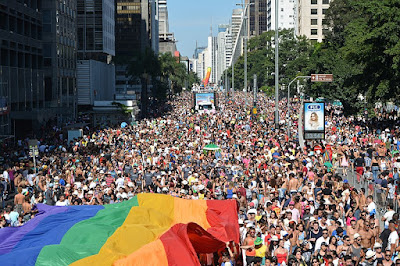 Here's the problem.  Even beyond the obvious issue of equal rights for LGBTQ people at the heart of the debate, this viewpoint is completely contrary to what biological science says.  "Gender" is a construct of a lot of different features -- anatomy, brain wiring (the "which gender do you feel like?" part comes from this), chromosomal makeup (XX or XY or, in some cases, other combinations), hormone levels, and sexual orientation.  What the people pressing for this redefinition would like is if those always lined up in exactly the same way.

Gender is not simple, and it's clearly non-binary.  Let's just look at two situations that should illustrate that beyond doubt.

First, consider the condition XY androgen insensitivity.  In this condition, the embryo has the ordinary male configuration chromosomally (XY), but has a genetic mutation that prevents the formation of receptors for testosterone.  During development, all embryos looks female until midway during the second trimester.  If the baby has an XY chromosome configuration, at that point -- assuming everything is working the usual way -- testosterone takes effect, the testicles descend into the scrotum and the penis gets larger.  In other words, all of the things parents look for during an ultrasound when they want to find out the sex of their baby.

In XY androgen insensitivity, none of this happens.  The baby looks anatomically female.  A pelvic exam -- seldom done on young children -- would reveal that the child has no uterus, only the lower two-thirds of the vagina, and gonads that are still small and undeveloped, and are still in the abdominal cavity.  These children usually are identified when the age of puberty hits and they don't start to menstruate, but up to then, they are perfectly ordinary girls who have female external anatomy, and more important, feel that they're female.

Santhi Soundarajan, an Indian track star, is one of these.  Because many female elite athletes have very low body fat content, a good many of them don't ovulate, which is why her condition wasn't identified.  But she competed in the Olympics, won a silver medal in the 800 -- and only afterwards did she learn that her chromosomes were XY, not XX.  The Olympic committee stripped her of her medal and banned her from competition.

What would you do if you were told the one thing you loved, were passionate about, excelled at, was no longer an option?  Santhi Soundaraian attempted suicide.

Then there's 5α-reductase deficiency.  The issue with this condition is the hormone dihydroxytestosterone, which is what directly acts to produce the male anatomy.  Males have two copies of the DHT gene, one of which activates prenatally (causing the changes in a male fetus mentioned above), and the other at puberty.  People with a mutation in the first DHT gene are born looking female for the same reason they are in XY androgen insensitivity.  The thing is, the second copy of the gene -- the one that activates at puberty -- works just fine.

Add that to recent studies of gender identification in which it was conclusively established that trans individuals' brains are wired like the gender they identify with, not the gender associated with their anatomy.  So all the people who have liked to har-de-har-har about "boys who think they're girls" and how ridiculous that is and how next thing you know, you'll have people identifying as rocks (yes, I actually heard someone say that) -- please do shut up.  All you're doing is establishing how ignorant you are of the biological facts.

The biology of gender is complex, and not fully understood.  We still don't know if sexual orientation is genetic -- it appears to have a genetic component at least.  It, too, is non-binary.  About four percent of people identify as bisexual, for example.  And if you think sexual orientation is a choice, ask yourself when you sat down and gave thoughtful consideration to each gender, and decided which you chose to be attracted to.

Basing gender designation on anatomy alone is not just simpleminded; it's flat-out wrong.  So basing policy on an arbitrary, government-mandated definition of gender is two steps removed from the truth.

Look, I'm sympathetic if there are some parts of reality that make you feel squinky.  There are parts of it I'm not especially fond of myself.  But that doesn't mean the bits you don't like aren't true.  And if you're using your own squinky feelings to make decisions about who other people are, what rights they should have, and what they should be able to do with their own bodies, you are light years away from anything that could be called moral behavior.

Posted by Gordon Bonnet at 1:55 AM