I've blogged before about "miraculous thinking" -- the idea that an unlikely occurrence somehow has to be a miracle simply based on its improbability.  But yesterday I ran into a post on the wonderful site RationalWiki that showed, mathematically, why this is a silly stance.

Called "Littlewood's Law of Miracles," after British mathematician John Edensor Littlewood, the man who first codified it in this way, it goes something like this:
Of course, this is some fairly goofy math, and makes some silly assumptions (one discrete event every second, for example, seems like a lot).  But Littlewood does make a wonderful point; given that we're only defining post hoc the unlikeliness of an event that has already occurred, we can declare anything we want to be a miracle just based on how surprised we are that it happened.  And, after all, if you want to throw statistics around, the likelihood of any event happening that has already happened is 100%.

So, like the Hallmark cards say, Miracles Do Happen.  In fact, they're pretty much unavoidable. 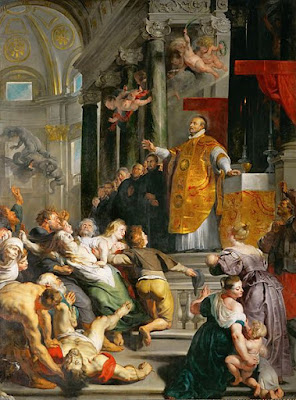 Peter Paul Rubens, The Miracle of St. Ignatius (1617) [Image is in the Public Domain]

You hear this sort of thing all the time, though, don't you?  A quick perusal of sites like Miracle Stories will give you dozens of examples of people who survived automobile accidents without a scratch, made recoveries from life-threatening conditions, were just "in the right place at the right time," and so on.  And it's natural to sit up and take notice when these things happen; this is a built-in perceptual error called dart-thrower's bias.  This fallacy is named after a thought experiment of being in a pub while there's a darts game going on across the room, and simply asking the question: when do you notice the game?  When there's a bullseye, of course.  The rest is just background noise.  And when you think about it, it's very reasonable that we have this bias.  After all, what has the greater evolutionary cost -- noticing the outliers when they're irrelevant, or not noticing the outliers when they are relevant?  It's relatively obvious that if the unusual occurrence is a rustle in the grass, it's far better to pay attention to it when it's the wind than not to pay attention to it when it's a lion.

And of course, on the Miracle Stories webpage, no mention is made of all of the thousands of people who didn't seem to merit a miracle, and who died in the car crash, didn't recover from the illness, or were in the wrong place at the wrong time.  That sort of thing just forms the unfortunate and tragic background noise to our existence -- and it is inevitable that it doesn't register with us in the same way.

So, we should expect miracles, and we are hardwired to pay more attention to them than we do to the 999,999 other run-of-the-mill occurrences that happen in a month.  How do we escape from this perceptual error, then?

Well, the simple answer is that in some senses, we can't.  It's understandable to be surprised by an anomalous event or an unusual pattern.  (Think, for example, how astonished you'd be if you flipped a coin and got ten heads in a row.  You'd probably think, "Wow, what's the likelihood?" -- but any other pattern of heads and tails, say, H-T-T-H-H-H-T-H-T-T -- has exactly the same probability of occurring.  It's just that the first looks like a meaningful pattern, and the second one doesn't.)  The solution, of course, is the same as the solution for just about everything; don't turn off your brain.  It's okay to think, at first, "That was absolutely amazing!  How can that be?", as long as afterwards we think, "Well, there are thousands of events going on around me right now that are of equally low probability, so honestly, it's not so weird after all."

All of this, by the way, is not meant to diminish your wonder at the complexity of the universe, just to direct that wonder at the right thing.  The universe is beautiful, mysterious, and awe-inspiring.  It is also, fortunately, understandable when viewed through the lens of science.  And I think that's pretty cool -- even if no miracles occur today.