It will come as no particular shock to people who know me well that I loathe telephones.

I'm not exactly sure why, other than my general introversion.  I will go to significant lengths not to call people on the phone, preferring alternative methods like sending a letter via Pony Express.  When someone calls me, my reaction to the phone ringing is annoyance.  It's like Pavlov's dog, except instead of salivating when the bell rings, I swear loudly.

So it's unsurprising that I resisted getting a cellphone for years.  I hate having phones at home; the last thing I wanted to do was carry one around with me 24/7.  Having a cellphone with me while I'm relaxing on vacation is about as appealing as bringing along a dentist so while I'm lounging on the beach, he can do a little impromptu root canal.

I had one of those old flip phones for a while, which (for me) had the advantage that it had lousy reception, and only occasionally worked.  I also liked that it looked like the communicators on the original Star Trek, and I was sometimes known to flip it open and say, "Beam me up, Scotty," to whoever was calling.

At least I found it funny. 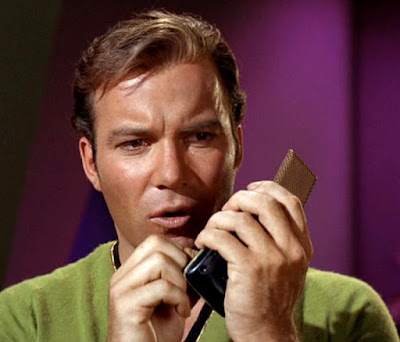 The problem was, I so seldom used it that I never could remember my voicemail password, and in fact, for a long time, I didn't even know my own phone number.  I recall being at the doctor's office, and they were updating my paperwork, and they asked for my cellphone number.  I said I couldn't remember.  The secretary gave me the slow single-eyebrow-raise, and said, "But you do have a cellphone, sir?"  I said, "Yeah, but I never call it, now do I?  So how would I know what the number is?"

From her expression, it was clear she didn't understand what a battle it was even to get me to carry it.  Remembering my phone number was just a bridge too far.

But a couple of years ago, after much cajoling from my wife and friends, I got an iPhone.  And I will admit that there are times it comes in handy.  I like having the GPS capability, even though I wish I could change the computerized voice that gives the directions to, say, Alan Rickman as Snape:


Me: *takes a wrong turn*
Snape voice:  "Why do I bother trying to tell you anything?  You are either deaf or hopelessly stupid.  So now you're lost.  Don't look to me to get you back on track."

Also, I can do essential things like checking to see how many "likes" I have on my last criticism and/or ridicule of Donald Trump on Twitter, and also how many profanity-laced, spittle-flecked responses I got from the #MAGA crowd.

Anyhow, all this comes up because of an article over at the Financial Post, wherein I learned that my acquiescing to getting an iPhone has another downside:

It's going to inform the Antichrist of my whereabouts in the event of the End Times.

This pronouncement came this week from Patriarch Kirill, the head of the Russian Orthodox Church.  "The church does not oppose technological progress," Kirill said in an interview on Russian state television, "but I am concerned that someone can know exactly where you are, know exactly what you are interested in, know exactly what you are afraid of, and that such information could be used for centralized control of the world.  Control from one point is a foreshadowing of the coming of Antichrist, if we talk about the Christian view.  Antichrist is the person who will be at the head of the world wide web that controls the entire human race."

I have to admit that I'm with Kirill in the sense that social media's ability to parse my likes and dislikes and demographics and affiliations from my clicks is a little unsettling.  For example, I'm bombarded by advertisements for running gear and scientific gadgetry -- even on sites I've never gone to before.  Most alarming, though, was a conversation that took place with my wife while I had my iPhone in my pocket, about people who dress their dogs up in costumes, in which I mentioned offhand that we should get an AT-AT costume for our coonhound Lena, that her long skinny legs would be perfect for the part. 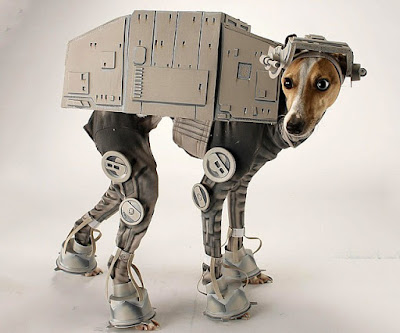 I got on my computer when I got home, and the first thing I saw on Facebook was...

... an advertisement for AT-AT suits for dogs.

So apparently the Christmas carol about "he sees you when you're sleeping, he knows when you're awake" is not taking about Santa Claus, it's talking about Mark Zuckerberg.

Anyhow, I'm not all that worried about the Antichrist.  First, I'm an atheist, so I kind of doubt he exists in the first place.  Second, if I'm wrong and the Antichrist exists, it's not like I'd be that hard to find even if I didn't have an iPhone.  I'm kind of hiding in plain sight, you know?

Third, I'm not really sure why he'd want to find me anyhow.  I don't think I'd be that useful to an evil entity intent on taking over the world, unless for some reason the evil entity had a burning desire to learn about the Krebs Cycle.

So there's our news from the fringe for today.  Now, y'all'll have to excuse me, because I gotta go check my Twitter app for the latest likes and hate-tweets.  Antichrist or no Antichrist, I gotta keep up with my public.