Sometimes the simplest, most innocuous-seeming questions can lead toward mind-blowingly profound answers.

I remember distinctly running into one of these when I was in -- I think -- 8th grade science class.  It was certainly pre-high-school; whether it was from Mrs. Guerin at Paul Breaux Junior High School, or another of my teachers, is a memory that has been lost in the sands of time and middle-aged forgetfulness.

What I have never forgotten is the sudden, pulled-up-short response I had to what has been nicknamed Olbers' Paradox, named after 18th century German astronomer Heinrich Wilhelm Matthias Olbers, who first thought to ask the question -- if the universe is infinite, as it certainly seems to be, why isn't the night sky uniformly and dazzlingly bright?

I mean, think about it.  If the universe really is infinite, then no matter what direction you look, your line of sight is bound to intersect with a star eventually.  So there should be light coming from every direction at once, and the night sky shouldn't be dark.  Why isn't it?

The first thought was that there was something absorptive in the way -- cosmic dust, microscopic or submicroscopic debris left behind by stars and blown outward by stellar wind.  The problem is, there doesn't seem to be enough of it; the average density of cosmic dust in interstellar space is less than a millionth of a gram per cubic meter.

When the answer was discovered, it was nothing short of mind-boggling.  It turns out Olbers' paradox isn't a paradox at all, because there is light coming at us from all directions, and the night sky is uniformly bright -- it's just that it's shining in a region of the spectrum our eyes can't detect.  It's called the three-degree cosmic microwave background radiation, and it appears to be pretty well isotropic (at equal intensities no matter where you look).  It's one of the most persuasive arguments for the Big Bang model, and in fact what scientists have theorized about the conditions in the early universe added to what we know about the phenomenon of red-shifting (the stretching of wavelengths of light if the space in between the source and the detector is expanding) gives a number that is precisely what we see -- light peaking at a wavelength of around one millimeter (putting it in the microwave region of the spectrum) coming from all directions. 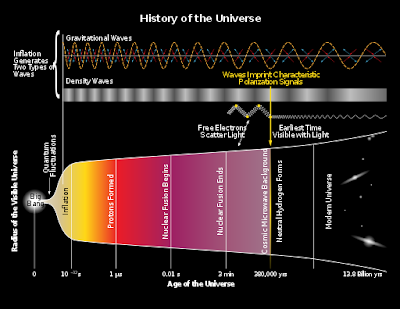 So, okay.  Olbers' paradox isn't a paradox, and its explanation led to powerful support for the Big Bang model.  But in science, one thing leads to another, and the resolution of Olbers' paradox led to another paradox -- the horizon problem.

The horizon problem hinges on Einstein's discovery that nothing, including information, can travel faster than the speed of light.  So if two objects are separated by a distance so great that there hasn't been time for light to travel from one to the other, then they are causally disconnected -- they can't have had any contact with each other, ever.

Okay, so what?  They can't talk to each other.  But it runs deeper than that.  When the aforementioned cosmic microwave background radiation formed, on the order of 300,000 years after the Big Bang, those objects were already causally disconnected.  And the process that produced the radiation is thought to have been essentially random (it's called decoupling, and it occurred when the average temperature of the universe decreased enough to free photons from the plasma and send them streaming across space).

The key here is the word average.  Just as a microwaved cup of coffee could have an average temperature of 80 C but have spots that are cooler and spots that are hotter, the fact that the average temperature of the universe had cooled sufficiently to release photons doesn't mean it happened everywhere simultaneously, leaving everything at exactly the same temperature.  In fact, the great likelihood is that it wouldn't.  And since at that point there were already causally disconnected regions of space, there is no possible way they could interact in such a way as to smooth out the temperature distribution -- sort of like what happens when you stir a cup of coffee.

And yet one of the most striking things about the cosmic microwave background radiation is that it is very nearly isotropic.  The horizon problem points out how astronomically unlikely that is (pun intended) if our current understanding is correct.

One possible explanation is called cosmic inflation -- that a spectacularly huge expansion, in the first fraction of a second after the Big Bang, smoothed out any irregularities so much that everywhere did pretty much decouple at the same time.    The problem is, we still don't know if inflation happened, although work by Alan Guth (M.I.T.), Andrei Linde (Stanford), and Paul Steinhardt (Princeton) has certainly added a great deal to its credibility.

So as is so often the case with science, solving one question just led to several other, bigger questions.  But that's what's cool about it.  If you're interested in the way the universe works, you'll never run out of things to learn -- and ways to blow your mind.