I swear, sometimes it seems like the universe is listening.  And laughing at me.

You may recall from Saturday's post, about people thinking that drinking distilled water can cure and/or kill you, that a few days previous I'd wondered what happened to all the alt-med woo-woos, that it seemed like we hadn't heard anything from them in a long while.  Then a loyal reader sent me the distilled water link, and I found out I was wrong.

But apparently pointing out that the quacks hadn't quacked in a long time has now opened the floodgates.  Because a different loyal reader sent me another link yesterday, this one worse than the distilled water one.

This site claims that there's a "herbal remedy" that -- and I promise I'm not making this up -- can be stuck into a woman's vagina to "detox the imprints left behind by her ex-boyfriend."

The product, which is called "Goddess Vaginal Detox Pearls," is a little lump of various herbs wrapped in a piece of cloth that supposedly can reduce menstrual cramps, increase libido, kill parasites, and "detox your ex."  The head of the company that sells these things, Vanessa White, explains that every time a woman has sex, the man leaves an imprint on her "yoni, womb, and uterus area."

The "pearls," she says, have a "vibrational energy" that can somehow sync up with the bad vibes left behind by your former lover and pull those out.  "I remove (insert person’s name) from my womb area during this cleanse," is what you're supposed to say, instead of what seems more reasonable to me, which is, "I wish like hell I had a higher IQ."

Oh, and you're supposed to leave the thing up there.  For days.

So, okay.  I have a few reactions to all of this, as follows:
Worse still, you should read some of the comments left by reviewers.  Wait, cancel that; many of these reviews came with photographs, and despite being a biologist and relatively inured to gross stuff, I think I'm going to need some therapy to get over looking at them.  As I read along, my expression got closer and closer to this: 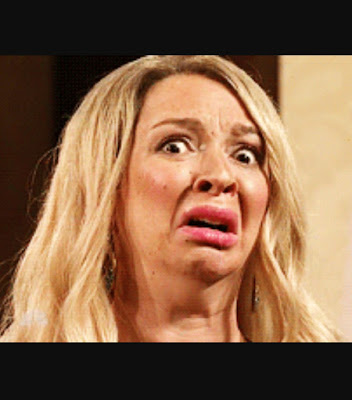 Women who have used these things have had burning pain, various sorts of discharge that I would prefer not even thinking about, and -- in at least two cases -- have lost pieces of their vaginal lining.

If that doesn't make you stay in a protective crouch for the rest of the day, you're made of sterner stuff than I am.  And that's even considering that, as aforementioned, I'm male.

But of course, there's the usual "this product is not intended to diagnose, treat, or cure any medical condition" disclaimer, which apparently is meant to mean, "We can ask you to do any idiotic thing we want in the name of health and still get off scot-free.  We could ask you to stick cow shit up your nose.  We could ask you to stand on your head outside, stark naked, in the middle of January, and sing the National Anthem.  We could ask you to stare straight into the Sun to absorb its healing rays directly into your retinas.  And the reason we can do this is because: many of you would do it without question.  And afterwards, claim that the quantum vibrations of your auras were much improved or some fucking thing.  And then look around for the next 'cure' we're peddling."

So, yeah: if I haven't made the point clearly enough, (1) do not stick random stuff into your orifices unless you're sure they're sterile and won't burn your insides so bad your tissue starts sloughing off.  (2) Having consensual sex does not leave an imprint on your internal body parts.  And for cryin' in the sink, (3) please exercise a little critical thinking before you buy the latest thing from the alt-med gurus.

Posted by Gordon Bonnet at 1:57 AM