Like many of my fellow Americans, I had hoped to get through the holiday season without conflict, but was thwarted by the acrimonious times we live in.  As these things go, the conflict I was in was pretty mild.  No dishes were thrown, no fists pounded on tables, no ugly epithets hurled, and we all parted still more or less as friends.

Even so, it wasn't what I would call pleasant.  As someone who despises conflict, and doesn't enjoy either politics or argument for their own sakes, I would very much have liked to avoid it.  One of the things that struck me -- this always strikes me in these situations -- was the sheer immovability of the participants.  No one budged one iota from their positions, not after an hour of heated discussion.  To be fair, neither did I.  But the fact that no one changed even the smallest bit of their opinion brought home how utterly pointless it all was.

We're all rock-solid-sure of our views, pretty much all the time, aren't we?  Well, maybe not as much as we think, to judge from new research out of Lund University (Sweden), by cognitive scientists Lars Hall, Petter Johansson, Andreas Lind, Philip Pärnamets, and Thomas Strandberg.  In their paper that came out recently in the Journal of Experimental Psychology, "False Beliefs and Confabulation Can Lead to Lasting Changes in Political Attitudes," they showed that a simple trick -- a bit of sleight-of-hand -- can lead people to defend a view they originally argued against. 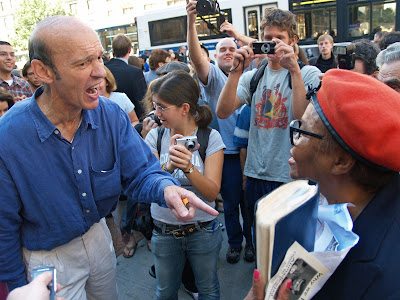 What they did was striking in its simplicity.  First, they showed test subjects various photographs of human faces, asking them to decide between pairs of them which was the more attractive.  The researchers surreptitiously exchanged the higher-rated photograph for the lower-rated one, and went back through the choices, saying, "This is the one you chose.  Do you still feel that way, or do you want to reconsider your decision?"

Two-thirds of the subjects never caught on.

Well, you might be thinking, that's just about physical attraction, which can change pretty fluidly, and isn't that critical anyhow.  But the researchers went a step further -- pulling the same kind of trick, but this time with political statements (for example, "It is more important for a society to promote the welfare of the citizens than to protect their personal integrity").  The review-your-decision phase of the test took one of the statements they'd agreed with and made it diametrically opposite to what they'd chosen.

Once again, two-thirds never noticed the change, and they were just as articulate in defending their position -- the one that, minutes earlier, had been the opposite of what they believed -- as they were opinions they'd held all along.

The real kicker: they were retested a week and then three weeks later, and most of them stuck with the view they didn't intend but had been forced to justify.

And didn't even know they'd changed.

I don't know about you, but I find this kind of hopeful.  It shows that human perception and memory are even more unreliable than I'd realized, which is rather humbling.  But it does mean that we can shift our views.  I suspect that the most powerful aspect was that the subjects were asked to defend the position they'd initially disagreed with, and that forced them to consider the opposite side's views without engaging the emotional side of the brain by identifying them as contrary to their own beliefs ahead of time.  This squares with an experience I had long ago.  A teacher in a high school English class had us all write position papers, and then debate them -- but we had to research and defend the opposite stance.  If your paper was about strengthening gun control laws, you had to argue in the debate on the side of loosening them.

It was an intensely uncomfortable experience, but it did make me aware of the fact that my opponents' views did have support, that they weren't simply unfounded and unjustified opinions.  I don't think the exercise changed my particular viewpoint, but it did make me appreciate that there was another defensible side.

So maybe political discourse isn't as hopeless as it seems.  It remains to be seen, however, how to engage this mental plasticity without the emotional brain screaming it down -- which it did with the argument I was in over the holidays.  But if we could, we might find that the acrimony largely vanishes -- and that our opinions may not be as far apart as they'd seemed.