It's way too easy to let yourself get caught up in all the ugliness in the news.

Scandals, allegations of crimes of all sorts by various public figures, humanitarian crises, ecological damage done by people who seem to have no real care for the long-term habitability of the Earth.  Hypocrisy, dishonesty, corruption.

Pretty dark stuff, and to judge by the news, it's about all humanity has to offer.

So today I'm going to write about something hopeful -- an indication that we have the capacity for a whole lot of positive things.  Curiosity, innovation, teamwork, and a deep-seated determination to understand the universe we live in.

Ultima Thule is the popular (but unofficial) designation of the object that is, much more prosaically, called MU-69.  It's far out in space by anyone's standards, circling the Sun at an average distance of 44 AU (astronomical units, the average distance from the Earth to the Sun).  By comparison, Neptune -- the outermost actual planet -- orbits at about 30 AU.  Even Pluto (which was downgraded from "planet" to "dwarf planet" status a few years back) orbits at an average 39.5 AU.

So if you reached Pluto, you'd still have a distance of four times the Earth to the Sun to cover before you'd be within hailing distance of Ultima Thule.

And it's not a large object, making me wonder how the hell anyone saw it in the first place.  It's highly oblong, with a long axis of about 33 kilometers and a short axis of 19 kilometers.  So that's the first amazing thing; using the Hubble Space Telescope, we spotted an object only a little more than twice the size of Manhattan Island from a distance of 6.5 trillion kilometers.

Then, astronomers decided it'd be a good place to visit, based on its position with respect to the trajectory of the New Horizons probe, which had sent back stunning photographs of Pluto in 2015.  So off the little spacecraft went, to visit one of the most distant objects known in the Solar System.

The photographs coming back are amazing.  It was known that Ultima Thule was oddly shaped, but as the probe approached, it became clearer and clearer that it was just an oval.  Some of the earliest photographs made it look like a spinning bowling pin.  When it got closer, we were able to see that it was shaped more like a snowman, leading to the inference that it was formed by the collision of two roughly-spherical bodies.  The impact must have been remarkably gentle; too fast, and it would have shattered one or both of the objects.  Instead, they appear to have spiraled in toward one another until finally they kissed -- and stuck together. 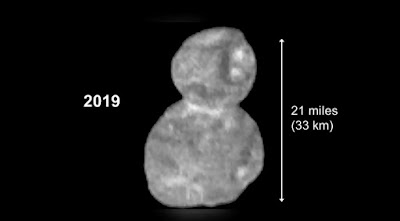 Astronomers are understandably thrilled by this opportunity to study an object close-up that is observable only as a 26th-magnitude speck of light from our position here on Earth.  Astrophysicist and former member of Queen Brian May wrote a song for the occasion, called "New Horizons," celebrating our perpetual drive for extending what we know about the universe.  (This isn't the first time May has worked his scientific background into his music.  One of Queen's best, and most under-appreciated, songs is the bittersweet and poignant "'39," which has as its basis the bizarre effects of near-lightspeed travel -- especially time dilation, which describes how fast travel slows down the passage of time, so that if you were to leave behind your loved ones and travel near the speed of light, you'd age only a year while the loved ones you left behind would age decades.  If you haven't heard it, click the link -- it's fantastic.)

NASA has promised better photographs as more data comes streaming in from the probe, but the ones they've already gotten are pretty amazing.  When you're looking at them, keep in mind that you're looking at something out there spinning space, half again as far from the Sun as the planet Neptune, and be amazed.

So let's take a break from the constant stream of negativity and vitriol, and consider what incredible journeys we can take into wonderment and beauty, journeys that have taken us into the farthest reaches of the Solar System and beyond.  As we sit down here, engaged in our petty squabbles and petty rhetoric, an intrepid little probe is out there relaying back information about are on the very edges of what we know.  And that, I think, is something about which humanity should rightly be proud.